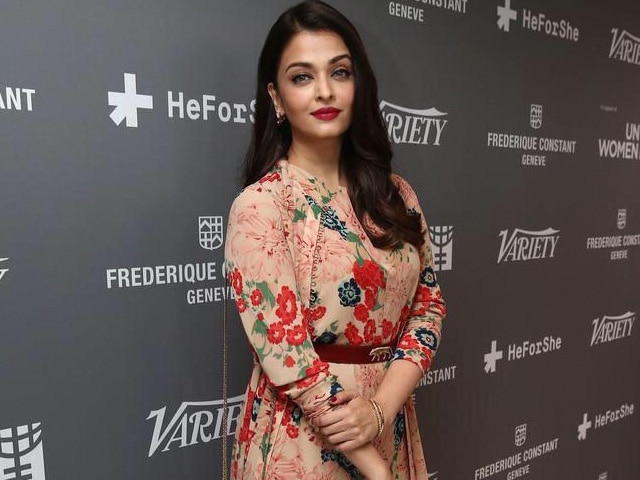 This image was posted on Twitter by Sabyasachi Mukherjee

She was at a gender equality seminar

A day before walking at the Cannes red carpet Bollywood actress Aishwarya Rai Bachchan attended Variety magazine's event on gender equality in the French Riviera.
At the event, which was a part of the Cannes Film Festival, Aishwarya, wore a floral print Sabyasachi dress finished out with a dark red lip colour. (Also Read: Aishwarya Rai Bachchan Will be on Twitter For a Day for Cannes)

Aishwarya also bonded with actress Salma Hayek at the event:

This image was posted on Facebook Aishwariya Rai Bachchan (Latest Photos)
Along with Aishwarya and Salma Hayek, Carol producers Christine Vachon and Elizabeth Karlsen participated in the discussion, which was moderated by Variety's editor-in-chief Claudia Eller.

This image was posted on Twitter by Aishwarya Rai Fans
Aishwarya arrived for the Cannes Film Festival on May 15 with her daughter Aaradhya. (Also Read: Aishwarya, Aaradhya Arrive at Cannes; Greeted With Flowers)
Aishwarya, who will be making her 14th consecutive appearance at the film fest, will walk the red carpet as L'oreal brand ambassador on May 17 and May 20. On May 19, the actress will be a part of an event, where the first look of her comeback film Jazbaa will be unveiled. And her Cannes travelogue will conclude with the amfAR gala on May 21, which she will attend with her husband, actor Abhishek Bachchan.