Cannes 2015: From Couture to Poodle Pjs, Sonam Kapoor Gears up For Act II 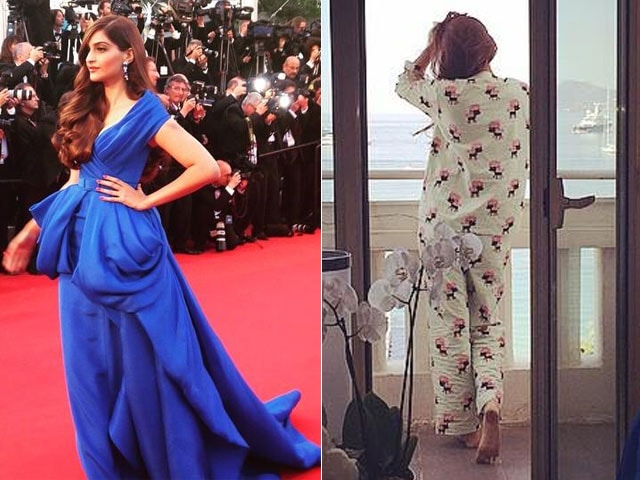 This image was posted on Twitter by Sonam Kapoor

Sonam Kapoor will shoot with her fellow L'oreal ambassadors today

Actress Sonam Kapoor was busy in a fashion marathon at the Cannes Film Festival on May 16, giving us four absolutely fantastic looks in a day.
The Khubsoorat actress, who has walked the Cannes red carpet as L'Oreal brand ambassador for the five consecutive year, woke up all set to resume her duties for the brand. (Also Read: Everything is Getting More Glamorous, Says Sonam Kapoor on Cannes)
Sonam Instagrammed this image, wearing poodle print pyjamas (rather than another couture) and captioned it:


Morning #cannes2015 shoot day! With all my fellow @lorealparisin ambassadors! (After a night of couture every girl needs her poodle pjs! )

Sonam, who walked the red carpet on May 16 in an electric blue Ralph & Russo dress, will also join beauty queen Aishwarya Rai Bachchan, who will walk the red carpet today.

Aishwarya, who will be making her 14th consecutive appearance at the film fest, will also walk the red carpet as L'oreal brand ambassador on May 20. On May 19, the actress will be a part of an event, where the first look of her comeback film Jazbaa will be unveiled. And her Cannes travelogue will conclude with the amfAR gala on May 21, which she will attend with her husband, actor Abhishek Bachchan.
Meanwhile, Sonam's trip to Cannes will end today.