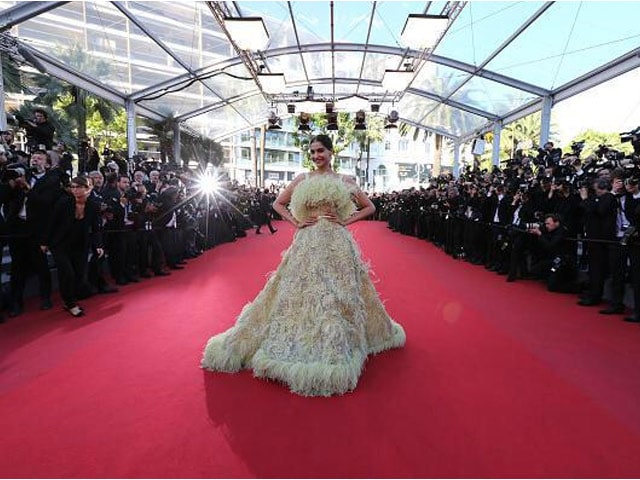 This image was posted on Twitter by Sonam Kapoor

On Twitter, people were reminded of Sesame Street's Big Bird, when Sonam, who wore Elie Saab couture, made her final appearance at Cannes this year

Actress Sonam Kapoor glided down the Cannes red carpet on May 18 in a sorbet-coloured feathered Elie Saab dress as tweet-worthy as the elaborate yellow dress Rihanna wore to the Met Gala.
In all fairness, Sonam looked as good in the giant confection as it is possible for anyone to look. The Internet, however, reduced it to memes almost instantly.
#TheDress reminded Twitter of Sesame Street's Big Bird

Cousin Itt from The Addams Family

They said I could be anything, so I decided to be grass. pic.twitter.com/5UYJJa9Lj5

Ya. Its all whatsapp. pic.twitter.com/GDQGCCWe8o

Twitter also made fun of how big #TheDress was

Fun Fact: If you look closely at Sonam Kapoor's dress you can see Masakali and her family chilling.

Suggested other uses for it

And considered the possibility that the dress was an accident

*when you get stampeded on during a mega hen and rooster marathon* pic.twitter.com/EtMFcdOk5v

Sonam Kapoor tried to dress as her dad's chest and succeeded

@scratchysingh when anil kapoor cut his colored hair n gives to sonam to make her a new dress....

That was Sonam's last appearance at Cannes this year so Twitter, if you are hoping for a spot of redemption, don't.