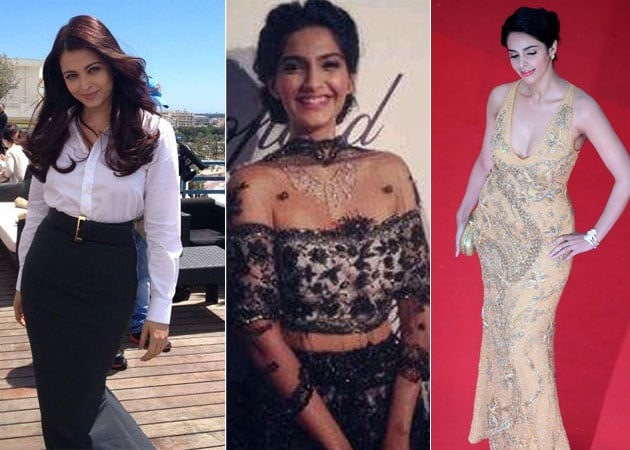 Ash, Sonam and Mallika are regulars at the Cannes Film Festival

Movies a la Croisette. Yes, it's that time of the year when world cinema puts its fashionable as well as creative foot forward at the French Riviera and the movie world comes calling to Cannes.

Movies a la Croisette. Yes, it's that time of the year when world cinema puts its fashionable as well as creative foot forward at the French Riviera and the movie world comes calling to Cannes. (Also read: Mallika Sherawat Will Wear This Indian Designer)
Filmmakers, actors, critics and forecasters, along with enthusiastic Oscar bloggers, head out for a week of glitz and glamour by the beach.
India's favourite export to Cannes, Aishwarya Rai Bachchan, has been a regular ever since she debuted at the festival in 2002 with Devdas. From being a member of the jury to making an appearance as the Indian face of a French cosmetic brand, it's her ensembles which have garnered interest amongst the Indian media more than anything. From several bedazzling moments to 'why oh why is she wearing what she is', Ash has managed to turn heads in her own way. (Also read: Aishwarya, Abhishek Bachchan's French connection)
The festival was where she introduced her husband Abhishek Bachchan in 2007 and daughter Aaradhya in 2012 and 2013. This year will be no different as the Bachchan bahu will be accompanied by husband Abhishek and daughter Aaradhya once again.
The couple are the brand ambassadors of amfAR (American Foundation for AIDS research) and will attend the gala on May 22, which will also host Sharon Stone, Milla Jovovich, Heidi Klum, Carla Bruni-Sarkozy, John Travolta, Kelly Preston, Harvey Weinstein and amfAR Chairman Kenneth Cole amongst others.
Also making her presence felt on the red carpet will be actress Sonam Kapoor. This is her third outing and the stylish Sonam says her look this year is a surprise. Well, we cannot wait for that one.
Uday Chopra too plans to join the Indian contingent, as producer of the opening film Grace of Monaco. YRF Entertainment has produced the biopic on the fairy tale romance between American actress Grace Kelly and Prince Rainier of Monaco. The movie stars Nicole Kidman and Tim Roth.
Yash Raj Films has another ace up its sleeve. Titli, backed by the studio and Dibakar Bannerjee, makes its way as the only Indian film in competition, in the Un Certain Regard section. Directed by Kanu Behl, the film tells the volatile story of two brothers.
And last but not the least, the one person who manages to make her way to every possible International festival - Mallika Sherawat. The motormouth actress has been invited to inaugurate the Indian Pavilion at the festival. We can't wait can we for that one either.