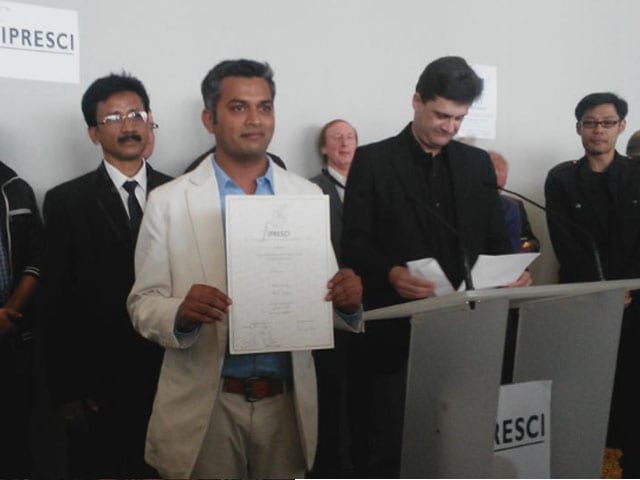 Showcased in the Un Certain Regard section at the movie gala, Masaan received a five-minute standing ovation after its screening

Indian filmmaker Neeraj Ghaywan's project Masaan, centred around a group of people in Varanasi, was awarded the International Federation of Film Critics (FIPRESCI) award at the 68th Cannes International Film Festival on Saturday. The film and its director also won the 'Most Promising Newcomer' Award in the Un Certain Regard section of the festival.
Director Neeraj Ghaywan broke the news on Twitter


#MASAAN just won the FIPRESCI award for UN CERTAIN REGARD at @Festival_Cannes!!!!! This was long due for India!!!

2nd award for India!! #MASAAN MOST PROMISING NEW COMER! See @anuragkashyap72 what your mentorship has got me to! pic.twitter.com/ToQ7IQjzrw

An overjoyed Richa Chadha, who features in a key role in the film, tweeted that she felt "blessed."


#MasaanAtCannes just got the Fipresci award, given by the international critics. #blessed :-) team, take a bow! pic.twitter.com/ARqjPiTbHb

The film, which is Neeraj Ghaywan's debut feature project, is set in the backdrop of Varanasi and follows the stories of four people from a small town.

Masaan also co-stars features Shweta Tripathi, Sanjay Mishra and Vicky Kaushal.
An Indian-French collaboration, the film has been co-produced by Manish Mundra of Drishyam Films, Macassar Productions, Phantom Films, Sikhya Entertainment, Arte France Cinema and Pathe productions.
The top prizes for the main selection at the gala will be awarded on Sunday night during the closing ceremony at the Palais des Festivals in Cannes. Jury presidents Joel and Ethan Coen will announce the winners.