Celebrating Shashi Kapoor: Nimbu Paani, Sangria and Bollywood at its Most Polite 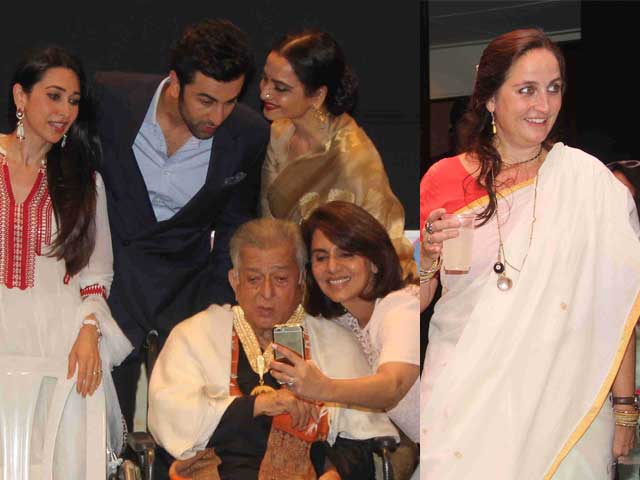 Celebrities came in early morning at the Prithvi Theatre, bang on time, without fuss or fanfare and without that ubiquitous carpet

As reporters, we've spent far too many days, evenings, nights propping up sundry red carpets and the paraphernalia that goes with them. The lights, the noise, the screaming teeming fans, the screaming teeming reporters waiting for a sound bite. The stars who pander, those who walk past stony-faced. And while, happily, its been while since I've had to, the ceremony to present Shashi Kapoor his Dada Saheb Phalke Award was still a surprise.
It was a more personal event, a warmer, more intimate one than I have seen Bollywood turn out in while. And that's saying something, considering the cast of characters that included the man himself and his extended clan: his children Sanjana and Kunal, Rishi Kapoor, Rishi's mother Krishna Raj Kapoor, Neetu Singh, Ranbir, Karisma and Saif Ali Khan. There were Amitabh and Abhishek Bachchan and Shashi Kapoor's heroines: Waheeda Rehman, Asha Parekh, Zeenat Aman, Hema Malini, Shabana Azmi, even Rekha.
They came in early morning at the Prithvi Theatre, bang on time, without fuss or fanfare and without that ubiquitous carpet. No background noise (even us mediawallas had - mostly - picked up on the mood). They milled around, they greeted the legend when he was wheeled out and partook of the plastic cups of nimbu paani and iced tea that were doing the rounds. This was subsequently upgraded to sangria. The snacks were simple, the mood was easy. The venue dictated some of it naturally, but most of the credit had to go to Shashi Kapoor himself.
The presentation acknowledged his accomplishments: this most recent one, the slew of National Awards that have preceded it, the fact that he was our first crossover star, the ambition of the films he produced.
A man universally acknowledged as a trememdous star, an even better producer, theatre's greatest friend and ally, a pioneer far ahead of his time and, by all accounts, a remarkably decent, always accessible person.
And that, unusually, was what his colleagues had to celebrate and to say. Zeenat Aman and Asha Parekh both spoke of the man than the co-star. Ms Parekh recounted her favourite story of how he once dressed up in a burkha just to get to her to give her a hug. Rajit Kapur spoke of how Shashi Kapoor's encouragement during a school production led him to be an actor. Shyam Benegal still swears that in all his years he's never had a nicer producer. There was more, too much, to recount.
And if I think about it, perhaps, the line that best summed up the occasion came from Javed Akhtar who, when asked to about Shashi Kapoor's legacy, simply spread his hands, smiled and said: Mere Paas Shashi Hai.