Censor Trouble for Angry Indian Goddesses Over Images of Kali 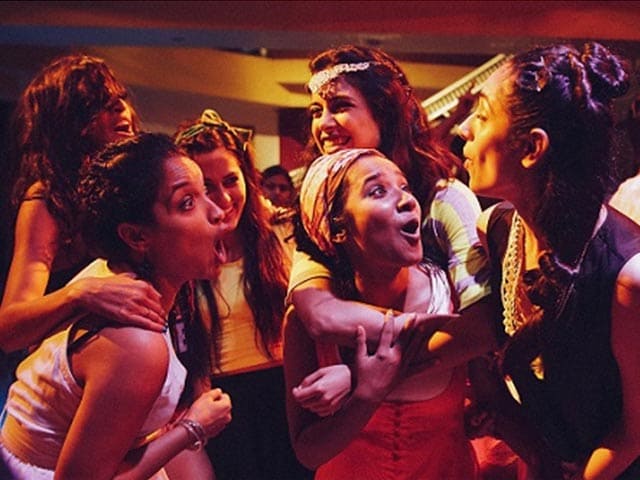 A still from Angry Indian Goddesses

"I am super sad and hurt because we have used completely respectful images of Kali in the film, but we had to blur them out. I have grown up watching gods and goddesses all my life in films. We cut people's head in the films, and suddenly we have to remove images of the goddesses," Pan Nalin said

With the Central Board of Film Certification (CBFC) demanding as many as 16 cuts in Pan Nalin's Angry Indian Goddesses, the filmmaker says he is 'super sad and hurt' with the decision.
The film reportedly invoked the wrath of the Pahlaj Nihalani-headed censor board for showing images of Hindu goddesses and for using certain words like 'adivasi', 'sarkar' and 'Indian figure'.
"I am super sad and hurt because we have used completely respectful images of Kali in the film, but we had to blur them out. I have grown up watching gods and goddesses all my life in films. We cut people's head in the films, and suddenly we have to remove images of the goddesses," Pan Nalin said during a visit to the IANS office here with the cast of the film.
Angry Indian Goddesses, which is being promoted as India's first 'female buddy' film, co-stars Sarah-Jane Dias, Tannishtha Chatterjee, Anushka Manchanda, Sandhya Mridul, Rajshri Deshpande and Adil Hussain.
Singer and former VJ Anushka, who is making her acting debut with film, said that 'we don't live in a democracy, but we live in a hypocrisy.'
"It holds true for many things, not just the censor board. It's the way we run this country. We are more worried about what other people think rather than living our own lives. It's not 'jiyo or jeeno do (live and let live)'. In our country, it is not like that. It's really unfair. Even the whole situation with us, we have really worked hard on the film, our soul is into it," Anushka said.
Nalin confidently said that even if the film was not released in India, it would still find its way here due to the international acclaim it has already garnered.
"This is such a feminine force from India, which is like Kali, the shakti. Even if the film was never released here, it would find its way to come as it's releasing in so many countries, almost everywhere in the world, uncut. They are all commercial releases," he said.
"Even Egypt is releasing it uncut, so you can imagine. They see strength in the film, they know people will watch it, it will entertain and inspire," he added.
Sandhya, who was last seen on the silver screen in Ragini MMS 2, said that they were not 'maligning or disrespecting anyone' by calling women 'goddesses' in the film.
"We are just having a conversation, we are not maligning anyone or disrespecting. We are just having a conversation about goddesses. Just like how Goddess Durga gets angry. Even Facebook has an app, 'Which goddess are you?'" Sandhya said.
Nalin, who is known for films like Samsara and Valley of Flowers that had spirituality and religion as their theme, said, "All the objection is not to associate Indian women with goddesses."
"Since Independence, every politician has addressed people as deviyon and sajjano (goddesses and gentlemen). "Even if you look at our mythology, it is strange the gods do nothing, it's the goddesses who do it. There are only goddesses doing everything," he said, pointing towards the dichotomy that existed in society.