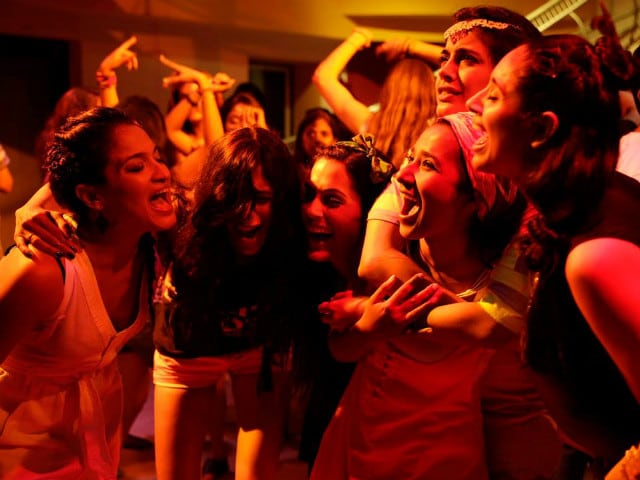 This image was posted on Facebook by Angry Indian Goddesses

Whispers in industry circles suggest that the film has landed in trouble over its song Dil Dola Re. The makers are finding it difficult to get the number cleared by the censor board. A source says that the song 'was rejected twice by the censor board'

Director Pan Nalin's Angry Indian Goddesses, which has been appreciated at various international film festivals, is all set to hit theatres in the country this week. (Also Read: Angry Indian Goddesses Wins Award at Rome Film Festival)
However, if whispers in the industry circles are to be believed, the film has landed in trouble over its song, Dil Dola Re. The makers of the film are finding it difficult to get the number cleared by the censor board as the phrase Dil Dola Re has a double meaning. The cast includes Sandhya Mridul, Tannishtha Chatterjee, Sarah-Jane Dias, Anushka Manchanda, Amrit Maghera, Rajshri Deshpande and Pavleen Gujral.
According to a source, "The song is not being allowed to air on television as the word Dil Dola Re can have a double meaning as there seems to be a pause after 'Dil Do' and is thus being misinterpreted. It was rejected twice by the censor board."
Confirming the news, a source close to the film says, "Yes, the song was not cleared to be aired on TV given its lyrics. The track is nothing, but a woman expressing her joy using quirky lyrics and has, in fact, become popular on the Internet."
When contacted, Pan Nalin said, "This song highlights a struggle of one of the goddesses, Joanna Mendes, who accepts B and C grade movies in order to reach her goal of becoming a Bollywood star. In the movie we see Joanna practicing her dance moves to the tunes of song called Dil Dola Re for her forthcoming film shoot. We frankly don't understand what will be achieved by censoring this."