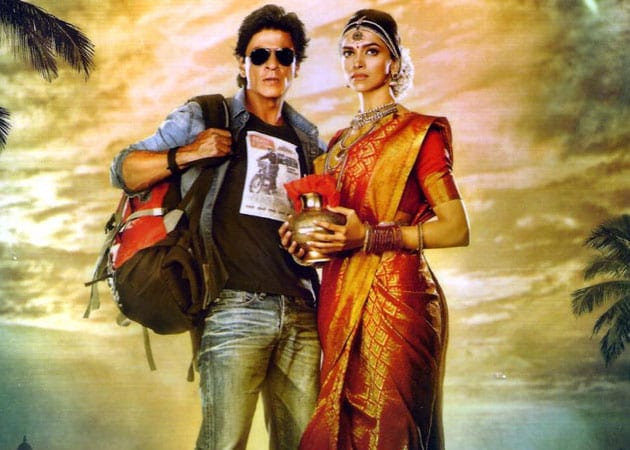 Chennai Express, featuring Shah Rukh Khan and Deepika Padukone, is chugging on with immense steam at the box office.

Chennai Express, featuring Shah Rukh Khan and Deepika Padukone, is chugging on with immense steam at the box office. The film recorded an opening day collection of Rs 33.12 crore, say trade experts, and it is expected to do well across national and international quarters over the weekend.
Heavy promotions for the Rohit Shetty directorial, coupled with a release on an auspicious occasion like Eid-ul-Fitr Friday, seem to have paid off. Even before the release, the buzz for the movie was strong, giving it a collection of Rs. 6.75 crore in the home country from paid previews Thursday itself.
"We've received an overwhelming response from all quarters and the film is being loved by everyone," Gaurav Verma, director - India theatrical distribution, Studios, Disney UTV.
"Though Chennai Express is playing in highest number of screens for any film, we still ran out of capacity in most locations due to this huge demand at the box office and the film is on its way to create new benchmarks," added Verma.
Trade analyst Taran Adarsh shared that the collective figures minted by the movie on Thursday and Friday in India amounted to Rs. 39.87 crore nett.
Said to have been made at a budget of Rs 70 crore, Chennai Express had a grand release in over 3,500 screens in the country and 700 screens abroad. The advance bookings for the film were strong, said Girish Wankhede of Cinemax chain.
"It's doing very well. On Thursday, there were 80 to 90 percent occupancy of seats. Advance booking was strong for this weekend. It will do very well in coming weeks also," Wankhede told IANS. Down south also, the movie has received a good response.
Trade analyst Trinath shared: "This is probably the best ever opening for a SRK film in the state. Even though people voiced about the stereotyping in Chennai Express, none had any issues with it and embraced it with a smile." In the film, Shah Rukh plays a north Indian, who falls in love with a Tamil girl, essayed by his "Om Shanti Om" co-star Deepika. The number of shows were doubled in Chennai for "Chennai Express" as Tamil movie "Thalaivaa" didn't release there.
"Since Thalaivaa didn't release, the number of shows for Chennai Express were doubled (on Friday). We had about 95 percent occupancy for the paid previews and most shows over the weekend are booked," a multiplex representative in Chennai, said.
Mumbai-based trade analyst Komal Nahta didn't find the film as entertaining as Shetty's previous films like the "Golmaal" series, but he didn't deny that the movie indeed got a "fantastic start" in India. Internationally too, the film is said to be doing well.
In the Gulf region, it released Thursday and minted $435,000, with 28 screens yet to report. But it is estimated to cross $550,000 by the time all screens report, said a source. In Singapore, two screens are yet to report, but it made $95,359 on Thursday. Chennai Express, an action comedy, had only night show previews in Britain on Thursday, numbers are 142,220 pounds with three sites yet to report.
In Australia, the paid previews Thursday amounted to $34,314, while in New Zealand, the figures came to $6,431. Adarsh shared on Twitter that the movie took a "huge start in US-Canada", earning $2,60,000 (Rs.15, 776,020.00 approximately) out of Thursday night preview shows. Officials at UTV Motion Pictures, which has co-produced the potboiler with Shah Rukh's Red Chillies Entertainment, are happy.
"Chennai Express has taken the box office by storm in international markets. The movie is setting new opening day and paid previews records and benchmarks for Hindi movies in most countries," Amrita Pandey, executive director, International Distribution, Syndication and Disney Media Distribution, Studios, Disney UTV, said in a statement.
"In many cinema chains we've added shows and the movie was moved to additional screens and to highest capacity screens. This has been a massive opening to a huge release," she added.