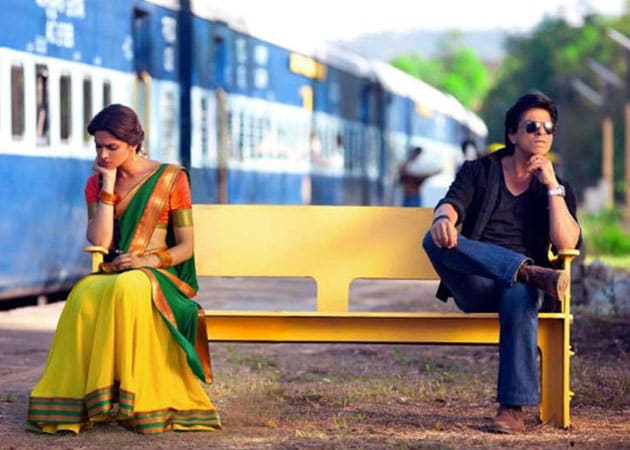 Meet Rahul, 40. He gets on the Chennai Express and has a hilarious encounter with Priya, the feisty daughter of a South Indian don.

Meet Rahul, 40. He gets on the Chennai Express and has a hilarious encounter with Priya, the feisty daughter of a South Indian don.
The trailer of Shah Rukh Khan and Deepika Padukone's much-awaited Chennai Express, about a journey from Mumbai to Rameshwaram, is here. Packed with action and laughs, director Rohit Shetty's first film with SRK promises to be a blockbuster. This could easily be the film of the year, unless Aamir Khan's Dhoom 3 spoils the party.
Shah Rukh Khan, who has a seemingly endless supply of comic one-liners, is the funniest we've seen in a long time as Bollywood's first officially middle-aged hero. But Deepika Padukone might just prove herself the real star of the film, with a hilarious performance as a Tamil belle.
Chennai Express re-unites SRK and Deepika six years after their first film together, Om Shanti Om, which was Deepika's debut.
Director Rohit Shetty, known for films like the Golmaal series, Singham and Bol Bachchan, has an enviable box office track record with a string of blockbusters each earning over Rs 100 crores. His usual collaborator is Ajay Devgn. August 8, the release date of Chennai Express, will prove if Mr Shetty can spin the same magic with SRK.
Watch video