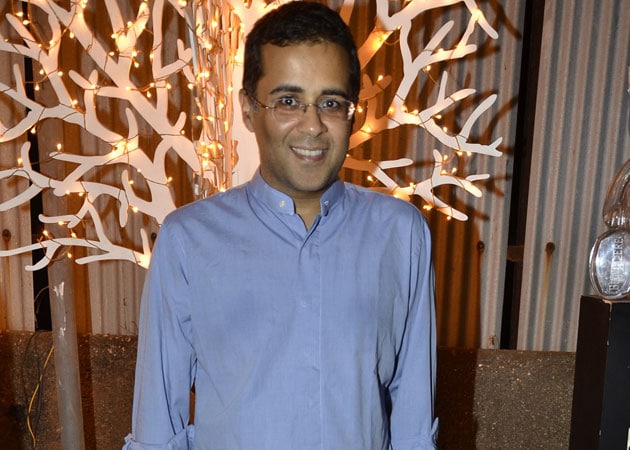 Four of Chetan Bhagat's five novels have been adapted for the big screen - the latest being 2 States, based on his book 2 States: The Story Of My Marriage.

Four of Chetan Bhagat's five novels have been adapted for the big screen - the latest being 2 States, based on his book 2 States: The Story Of My Marriage. The author says movies help him expand his reach among Indians.
In an interview, he shares his experience with 2 States, its team, his association with Bollywood and literature.
Excerpts:
Ques: Another movie adaptation of your novel, this one very close to home. How much of your true-life love story has the film managed to capture?
Chetan: Yes indeed, 2 States is quite close to me because the inspiration came from my own life. The key plot points are from my life but there is fictionalization and drama added as well. Hence, technically it is Krish and Ananya's story in the book and I think the film has captured that quite well.
Ques: How much of your romantic and marital life do we see in 2 States?
Chetan: Not much of my marital life, as the film ends with the couple getting married. It is also more a 'how to convince family' story so even the romantic bits are limited. (Also read: 2 States earns over Rs 12 crores on opening day )
Ques: You've been seen to be closely associated with the marketing of the film, standing up there with Alia Bhatt and Arjun Kapoor. How closely affiliated are you to this story's journey from your novel to cinema?
Chetan: I was only involved in the initial stages, in terms of placing the key members of the team in place, producers, director and the main cast. I was consulted on all of these and we came to a consensus on what works best. After that, it has been completely director Abhishek Varman's show. He has made a wonderful film and credit goes to him and his team. I came on board for the final promotions as the book is popular and it helps the book readers become aware of the film. (Also read: Revolution 2020 next Chetan Bhagat book to be adapted for film )
Ques: Your novels are invariably adapted for cinema. How comfortable are you with this transition? Which of your novels has been best adapted for cinema, and which one got it the least right on screen?
Chetan: I like to reach more Indians, and movies help me do so. The bigger the audience I have, the more likely they are to read my non-fiction columns on national issues or be interested in my views. Movies help me do that. I can't pick the least right.
Ques: How close do you feel to Bollywood and its culture now?
Chetan: I feel close enough that if I have a project in mind, I can reach a few people and discuss it with them. I have a few friends, mostly directors. However, I don't know if apart from work, I am close to Bollywood in any other way. I come from a different background, and I have a life and career outside of Bollywood. Films are just one of the things I do.
Ques: Chetan, you remain the only bridge in India between literature and the younger generation. How much of a performance pressure does this positioning put on you?
Chetan: I am not the only bridge, of course. There are many writers now and the bookshops are full of new books. However, I am lucky readers look forward to my work. There is, of course, enormous pressure. With 2 States, the expectations are sky high. Ditto for my next book. I have to make conscious efforts to remain calm.
Ques: What do you feel about the uneasy relationship between Bollywood and literature?
Chetan: Well, it is getting better. At least, in my case. I am extremely lucky, as many good projects languish for years. I have had all my books taken up for filming, and four of the five have been already made.
Ques: Would you consider directing a film in the near future?
Chetan: I could, but it is not a priority. If I can get to work with directors like Abhishek Kapoor and Abhishek Varman, there is no need for me to do that specialized role. As long as I can be part of great films, I am happy playing any role in them.
Ques: You are now working on your next novel. Please give us a glimpse into its content. Are you doing a sequel to 2 States?
Chetan: I'm not doing a sequel to 2 States at this point. I don't have a book length plot for it. I am working on, and indeed quite excited about my new book, which will release on Diwali this year. The book is a rural-urban love story, as I wanted to somewhat explore rural India in my own way.
Ques: Which recent Hindi films have you enjoyed, and why?
Chetan: I loved Queen enough to write a column on it. I also liked Highway.