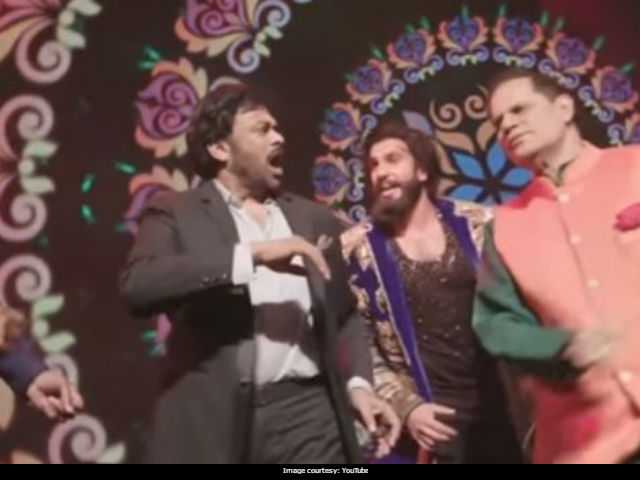 Chiranjeevi and Ranveer Singh in a still from the video (courtesy: Youtube)

South superstar Chiranjeevi and actor Ranveer Singh stole much of the limelight at the sangeet ceremony of GVK scion Keshav Reddy and Veena Reddy last weekend. It was not just Chiranjeevi and Ranveer at the do - numerous Bollywood stars and celebs from the Southern film industry also attended the grand wedding functions in Hyderabad. The pre-wedding rituals began on Saturday at Hyderabad's Taj Falaknuma Palace and were followed by a lavish wedding ceremony, and reception party on January 29. Chiranjeevi and Ranveer set the stage on fire as the song Ammadu Let's Do Kummadu from Chiranjeevi's Khaidi No 150 played in the background.
A brief video from inside the sangeet ceremony has been made available on social media, and is getting its fair share of views on the Internet. The video starts with a very energetic Chiranjeevi dancing to Ammadu Let's Do Kummadu like no one's watching. Soon, there appears a Ranveer Singh in the distance, who pops in between Chiranjeevi and politician Subbarami Reddy, the groom's grandfather, before proceeding to groove with another guest.
Chiranjeevi takes some time to recognise Ranveer, and his expression is priceless when he does. Ranveer smiles and responds in typically-Ranveer manner.
Video: Watch Ranveer Singh and Chiranjeevi Dance Here::

The Bajirao Mastani actor was also spotted with Sarah, Saif Ali Khan's daughter, at the wedding. A picture of the two sent the internet into a meltdown earlier this week.

The wedding ceremony was also attended by Sridevi and daughters Jhanvi and Khushi, Raveena Tandon and Shilpa Shetty. Keshav Reddy is the son of Sanjay and Aparna Reddy's and Veena is pharma baron Chinnappa Reddy's daughter.
Chiranjeevi, 61, was last seen in January release Khaidi No 150. 2016's Befikre was Ranveer Singh's last film. He will next be seen in Sanjay Leela Bhansali's Padmavati, co-starring Deepika Padukone and Shahid Kapoor.