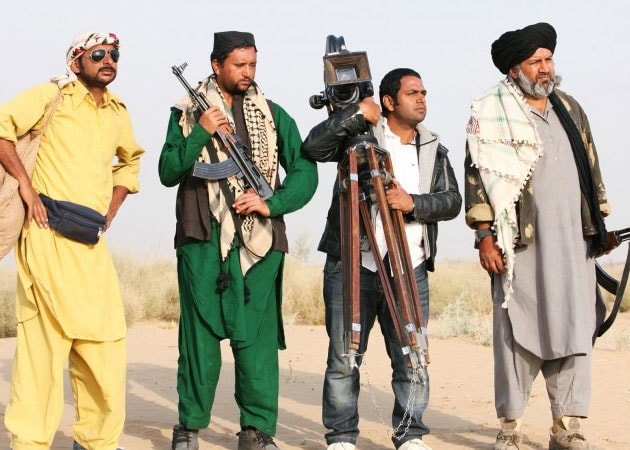 A still from the movie Filmistaan

Lack of resources and complications related to filming in Pakistan kept first-time Indian director Nitin Kakkar away from shooting his National Award winning saga Filmistaan which uses Bollywood to bind India and Pakistan.

Lack of resources and complications related to filming in Pakistan kept first-time Indian director Nitin Kakkar away from shooting his National Award winning saga Filmistaan which uses Bollywood to bind India and Pakistan. (Also Read: Filmistaan is Still 'Rock Steady' at the Box Office)
The movie, which released in India on June 6, has been lauded critically and commercially, but Mr Kakkar still wishes he had got a chance to shoot the movie in Pakistan too. There was always an effort to collaborate with Pakistan in "some way" on the film.
"We shot the whole film in 20 days. We didn't have anybody from Pakistan while shooting the film but (Pakistani singer) Shafqat Amanat Ali Khan has sung for the film. We are glad we worked with him because in some way we wanted to collaborate with Pakistan," Mr Kakkar told IANS in a telephonic interview from Mumbai.
Khan crooned Bhugol and Bol for the film starring Sharib Hashmi and Inaamulhaq, but had matters been in Mr Kakkar's hands, he would've taken his crew and shot the movie across the border.
"We would love to visit Pakistan; but that's the reason for making the film. It's very difficult to visit Pakistan. I would have loved to shoot the film in Pakistan but you know how times are. It's not easy for a small film like ours. We coudn't afford to get stuck even for two days. We did our shooting in Bikaner (Rajasthan) and researched in Mumbai," said Mr Kakkar.
The going wasn't easy for the crew at all. It took the filmmaker about 10 months to make the movie and by 2012 it was ready to hit the screens, but he had no funds to release it.
"We had the money to make the film, not to release it. The cost of production is less but the cost of releasing is a lot more. We are nobodys, so it's difficult for a film like that. To make our film visible in the industry takes time," Mr Kakkar said.
The movie, presented by Shringar Film Pvt Ltd and UTV Spotboy, won the best feature film in Hindi title at the 60th National Film Awards 2012, the Silver Crow Pheasant Award for best debut film at the International Film Festival of Kerala and a special jury mention at the 2012 Busan International Film Festival.
The comedy-drama managed to mint over Rs 3 crore in the four days since its release, but didn't reach audiences in Pakistan.
But the director hopes to make it happen some day. "We are looking at a Pakistani release. We're in conversation with distributors there and the censor board. We're trying to show them the film and hopefully get it released because I really feel the film should be shown on both sides of the border," said the director of the film, which has also received thumbs up from celebrities like Amitabh Bachchan and Vidhu Vinod Chopra.
The Central Board Of Film Certification in India shares a similar opinion.
"The censor board has been a darling. They were overwhelmed by the film. They told me that they want the world to see it. I feel blessed. I don't think the censor board is a big issue. For me, it was a great experience with the censor board. They gave my film a 'U' certificate without a single cut," he said.
Mr Kakkar, who will now helm Rakeysh Omprakash Mehra's next production, graduated from television to films. He believes that television has been his "training ground", but he enjoys filmmaking more. He's game to do TV again.
"I would love to do TV. I feel the kind of content on TV can improve and can give the audience a lot more. The way we present human community is not how it is. TV is living in the 1980s and we have moved ahead.
"I would love to see content which is strongly story driven and there should be a start and end to it," said Mr Kakkar, who had directed a few episodes of horror show Sssshh... Phir Koi Hai.