Dangal: Aamir Khan Is Very Nervous And It's Driving Him 'Crazy'

Dangal: Aamir Khan, who will be on the screen for the first time after 2014 blockbuster PK, said that he is "always stressed before a release" 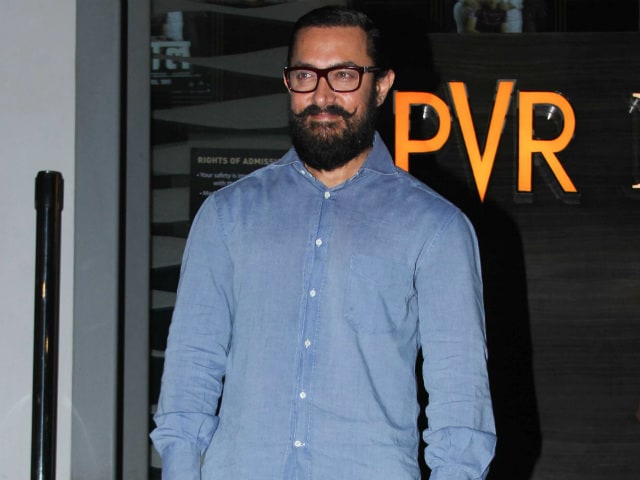 Dangal: Aamir Khan photographed at a screening of the film

Last month, Aamir Khan told the press that he had begun smoking again out of nervousness over his new film Dangal. The movie released today and, at a special screening held in Mumbai last evening, Aamir confessed that he still had a bad case of the nerves - so bad that he claimed to have hidden in a store room on the premises of Yash Raj Studios. "It's driving me crazy," he said. Dangal is Aamir's first release since 2014's PK. Stars like Sonakshi Sinha, Sunny Leone, Vidya Balan and Aamir's Qayamat Se Qayamat Tak heroine Juhi Chawla attended the screening and had only nice things to say about the film. Dangal is based the life of Haryanvi wrestler Mahavir Singh Phogat, who trained his daughters - Geeta and Babita - in wrestling.
At the screening, the 51-year-old actor said he's nervous not about how much Dangal will fetch at the box office but about whether or not cine-goers will like it. "I'm really nervous. Yesterday I had literally been hiding in the store room of Yash Raj Films so that no one could see me. I have been constantly thinking about Dangal and it's driving me crazy. Numbers do not matter to me, neither do awards. The audience liking my film is equivalent to winning an award for me," Aamir said. We don't think he needs to worry on that score, if the critical acclaim the film has already received is any indication. In his review for NDTV Movies, Saibal Chatterjee wrote,"Rarely has a Bollywood actor sunk his teeth into a meaty character with such gumption and glory."
Aamir Khan's filmmaker wife Kiran Rao said that Dangal made Mahavir Singh Phogat cry. Team Dangal hosted a special screening for the real life Phogat family on Tuesday. "Yeah, Aamir is very nervous because I know how much and what he is going through. But now, it's a little bit of a relief because Mahavir sir had appreciated the work of Aamir. When coming out of the screening, his eyes were red and he was crying because he saw himself in Aamir. I hope the movie will do well," Kiran told reporters. That's company for Aamir Khan, who said on Koffee With Karan that he cried while watching the film's trailer.
The stars who have so far not watched Dangal include Aamir's friends Salman Khan and Shah Rukh Khan. In an interview with PTI earlier this week, Aamir said he left messages with SRK and his Andaz Apna Apna co-star Salman but apparently both of them have their dates blocked with prior commitments. Aamir also added that a screening will be arranged according to their convenience. Aamir told reporters yesterday: "I have asked everyone to watch Dangal but let's see because everyone is busy. There is good response from the stars. I have also requested the government to make Dangal tax free." However, Salman's Khandaan was in attendance at yesterday's screening and they loved it. Salman, who starred in July's wrestling movie Sultan, is both happy and sad about the feedback he received from his family and this is how Aamir dealt with it:

@BeingSalmanKhan Sallu, in your "hate" I feel only love. "I love you like I hate you"

Actress Fatima Sana Shaikh, who features as Geeta Phogat in Dangal, said: "Yeah the day has finally come. All have liked the film and all are giving nice comments. After this we all will get busy in our own lives." Sanya Malhotra, who plays Babita, agreed with Fatima: "Yeah I agree with Fatima. We all will get busy in our own life. Just go and watch our movie that's what I want to say." Both Fatima and Sanya accompanied Aamir on Thursday. Child actors Zaira Wasim and Suhani Bhatnagar star as the younger versions of Geeta and Babita in Dangal.
Directed by Nitesh Tiwari, Dangal also stars Sakshi Tanwar as the wife of Aamir's character. Aamir had put on 25 kilos to play the older version of Mahavir Singh Phogat. He weighed 90 kgs at one point before losing the extra weight for his scenes as the younger Mahavir Phogat. Aamir's 'fat to fit' transformation has been a trending topic since he shared the details of his training regimen.