Dangal: Aamir Khan Tweets 'Thank You For Owning Our Film' After Record-Breaking Success 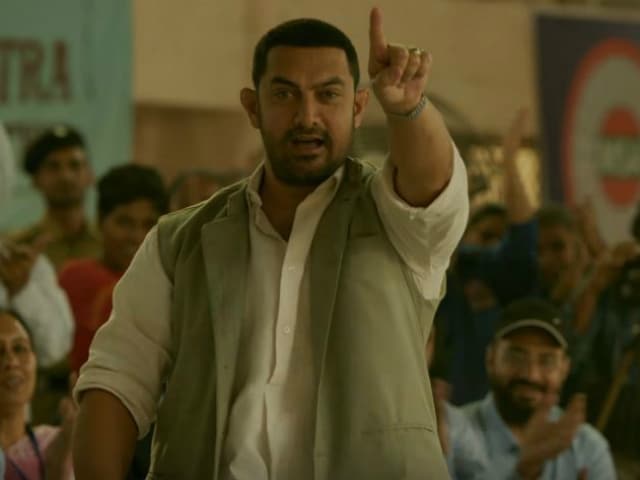 Aamir Khan was stressed, had started smoking again and was very, very nervous ahead of the release of Dangal. Aamir Khan's much-anticipated wrestling drama hit screens on December 23 and collection figures at the box office are unruly and continues to rise. It now stands at over Rs 130 crores, trade analysts reported on Tuesday. Dangal also had a record-breaking weekend with Saturday-Sunday collections summing up to Rs 78 crores. Aamir Khan, who earlier said that numbers do not bother him, finally broke his silence and tweeted about the response Dangal is receiving. "Thank you for all the love and warmth, and thank you for owning our film," Aamir Khan tweeted on Tuesday. Dangal's Sunday collections alone were reportedly the highest single day collection of any film at Rs 42.35 crores.
Dear cine-goers, a whole lot of love from Team Dangal:


Thank you for all the love and warmth, and thank you for owning our film. Love. Team Dangal.

Dangal released in Hindi, Tamil and Telugu versions, all of which comprise the box office numbers. It broke the record held by Salman Khan's Sultan whose highest one day collection was recorded at Rs 39 crores. Salman also starred as a Haryanvi wrestler in Ali Abbas Zafar's Sultan, which released in July. Dangal wrestled currency ban better than its Bollywood counterparts like Shah Rukh Khan's Dear Zindagi and Befikre - which opened in the wake of the scrapping of Rs 500 and Rs 1000 notes.
Trade analyst Taran Adarsh provided a day-wise break up of Dangal's box office collections:

Aamir Khan's film, which released a day early in USA than the scheduled date in India, also has impressive international box office numbers.


#Dangal has a PHENOMENAL run in the international markets... Grosses close to Rs 9 million in its opening weekend itself... contd.

Just a day before Dangal hit theatres, Aamir confessed to having hiding in a store room out of nervousness. Talking to reporters at a screening of Dangal, he said: "I'm really nervous. Yesterday I had literally been hiding in the store room of Yash Raj Films so that no one could see me. I have been constantly thinking about Dangal and it's driving me crazy. Numbers do not matter to me, neither do awards. The audience liking my film is equivalent to winning an award for me," he said.
Salman Khan's family were the special guests at the theatre the same day. Salman was kind enough to share their feedback on Twitter: