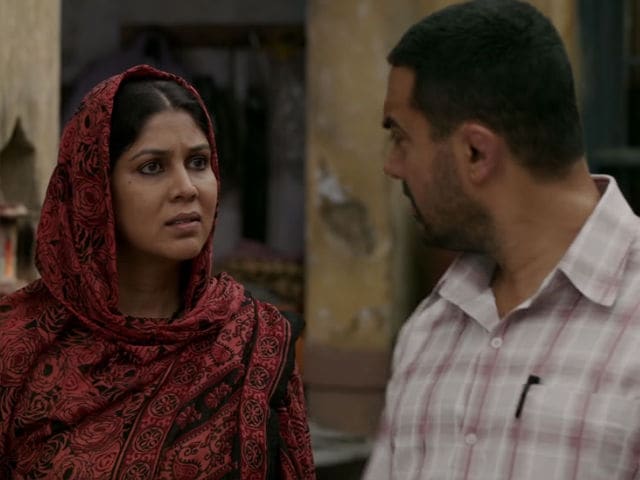 When Aamir Khan's new film Dangal releases tomorrow, it will be opening to rave reviews. The press has watched the film already and the unanimous verdict is that Dangal rocks, Aamir rocks and the rest of the cast rocks. In a film that made such extraordinary demands of its principal cast (mush has been said about Aamir's transformation, for instance), the least showy part is that played by actress Sakshi Tanwar - Daya Kaur, wife of wrestler Mahavir Singh Phogat, who is by all accounts as haanikaarak as portrayed in the first song from Dangal that was released. Sakshi's performance has been described by Saibal Chatterjee in our review as "subdued but effective" - made even more admirable when you think about the fact that most of Sakshi's experience has been in the sort of melodramatic tearjerker serials that TV-watching India thrives on. But Sakshi, 43, is 'done' with TV soaps, she told mid-day.com.
"I am done with them (soaps). I did it for years. Now, I would only consider being part of a finite series or agree to host a show," she told mid-day.com in an interview. Sakshi's TV credits, most famously the bahu Parvati from saas-bahu show Kahaani Ghar Ghar Kii, also allowed her to sign up for Dangal's Daya, a wife and mother, without stopping to worry about future typecasting by Bollywood. "I had no qualms playing mother to grown up girls. During my TV days, the soap would take 'generation leaps'. I have played a grandmother, great grandmother and what not. So, I had no reservations," Sakshi Tanwar told mid-day.com.
Sakshi was cast in Dangalon the recommendation of Aami Khan's mother who has followed her work on the small screen. "Yeh idea mujhe aaya Ammi ke wajeh se, kyunki Ammi TV serials dekhti hai aur Sakshi badi pasand hai (Ammi watches TV serials and she likes Sakshi)," Aamir said in a behind-the-scenes video posted last week. "Sakshiji itna kamaal ka kaam karti hai (she does such a wonderful job)," he added.
Video: Watch Aamir Khan on how Sakshi Tanwar was cast in Dangal

Dangal wasn't Sakshi Tanwar's first time on a film set. She co-starred with Sunny Deol in the unreleased Mohalla Assi and has appeared in a Marathi film and in 2008's C Kkompany. Dangal is, however, most certainly her biggest film and she felt the effects of it when she watched the film in its entirety. "When I watched the movie recently, it was surreal to see my name in the credits. It was as if my entire career unspooled before me. Aamir kept asking us for reactions, but I was frozen," Sakshi told mid-day.com.
Sakshi Tanwar is now going to make a web-series with Ram Kapoor, her co-star from Bade Achhe Lagte Hain.