Dangal: 'The one and only Aamir Khan,' wrote Ranveer Singh 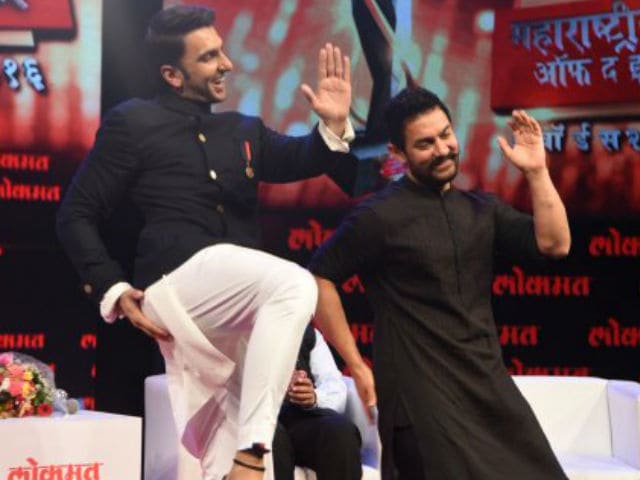 Aamir's Dangal has been reviewed by celebs who were invited to the screening. (Image by Bollywood Jammer)

Aamir Khan's Dangal is a day away from release and the film is the only thing the entertainment industry can talk about. Bollywood (and film critics) watched the film before than the rest of us plebians. Early reviews are pouring in and by all accounts, the Nitesh Tiwari-directed Dangal is one of its kind. The film may have received high praise from celebrities but for Aamir himself, the most fulsome compliments have come from actor Ranveer Singh who posted a picture on Instagram with a caption filled with superlatives. Aamir's Dangal is the this year's third to be based on sports after Salman Khan's Sultan and Sushant Singh Rajput's MS Dhoni: The Untold Story.
Ranveer shared a photo of himself with Aamir from an earlier event for the film and captioned it: "Devoted to the religion that is cinema... Passionate to an unparalleled degree... With an awe inspiring honesty... Storyteller by nature, megastar by virtue... He who posesses a childlike wonderment... My love for him is of the truest kind. The one and only... Aamir Khan." Ranveer and Aamir have sort of worked together in Dil Dhadakne Do, in which Aamir voiced Pluto the dog.
Read Ranveer's message for Aamir Khan:


Devoted to the religion that is cinema... Passionate to an unparalleled degree... With an awe inspiring honesty... Storyteller by nature, megastar by virtue.. He who posesses a childlike wonderment.. My love for him is of the truest kind The one & only... Aamir Khan!!! #Dangal


@aamir_khan's transformation reflects his utter dedication. His honesty makes #Dangal relatable & cinematically spectacular, all at once!

What a film #dangal is !!! Such an important event for the women & sports in our country @aamir_khan inspires us again, spellbound & in awe.

Dangal is the inspiring true story of wrestler Mahavir Singh Phogat who wants to win a gold medal for India. He pins his hopes on his daughter Geeta and Babita. The film chronicles their journey till Geeta's historic victory at the Commonwealth Games 2010, when she finally fulfilled her haanikarak bapu's dream.
Aamir stars as Mahavir Phogat while Fatima Sana Shaikh plays Geeta. Sanya Malhotra plays Babita, who won a silver medal. Sakshi Tanwar portrays the role of Daya Kaur.