Dangal: Salman And Aamir Khan Had This Epic Twitter Exchange

Dangal: Salman Khan, whose 51st birthday it is next week, tweeted that his family watched Aamir Khan's Dangal yesterday and thought it is better than his own movie 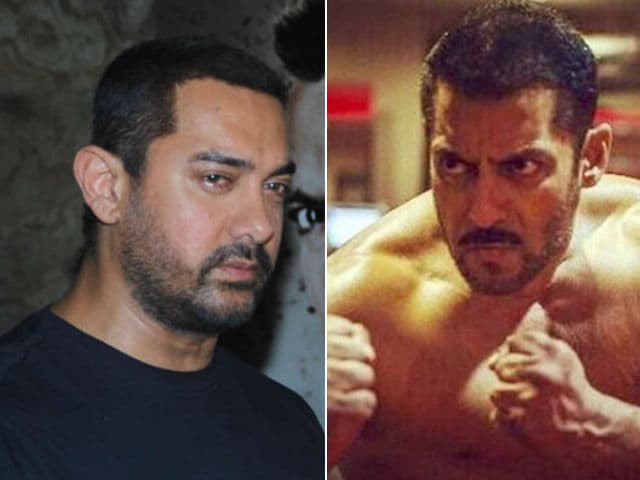 Aamir Khan's new film Dangal received a heartwarming endorsement from friend and colleague Salman Khan in a tweet last night. Dangal opened today to rave reviews from critics - it has already been gushed over by celebs who watched advance previews and for once, the critics' verdict appears to match that of the stars. Dangal is the film of the year, it has been unanimously agreed and late last night, Salman Khan added to the celebrity praise. Aamir's Dangal and Salman's Sultan, which released in July, both deal with the sport of wrestling. Salman, whose 51st birthday it is next week, tweeted that his family watched Dangal yesterday and thought it is better than his own movie. "Love you personally, Aamir, but hate you professionally," he wrote.

Aamir, 51, responded promptly with this, a smart reference to the Delhi Belly dance number he appeared in:


@BeingSalmanKhan Sallu, in your "hate" I feel only love. "I love you like I hate you"

Earlier this week, Aamir Khan told news agency PTI that he was hoping to arrange a special screening for Salman, with whom he starred in cult comedy Andaz Apna Apna, and Shah Rukh Khan but that neither had texted him back. "Everyone is busy," he said at a screening of Dangal yesterday. Shah Rukh Khan is certainly busy prepping for his new release Raees, out next month. Salman Khan is currently shooting Tubelight, pictures of which he posts sporadically on social media.
Dangal, hailed as Aamir Khan's best work yet, is a biopic of Haryanvi wrestler Mahavir Singh Phogat and tells the story of how he trained his daughters Geeta and Babita into medal-winning wrestlers. Aamir plays the fearsome Mahavir, a man bent on glory and who will achieve it by both riding rough-shod over his daughters' wishes and the disapproval of his village. Geeta and Babita are played by actresses Fatima Sana Sheikh and Sanya Malhotra. TV star Sakshi Tanwar plays Mahavir Phogat's wife Daya Kaur. Dangal is directed by Nitesh Tiwari.