In the new Dangal poster, Aamir Khan takes the centre spot and is flanked by both the younger and older versions of the Phogat sisters, Geeta and Babita 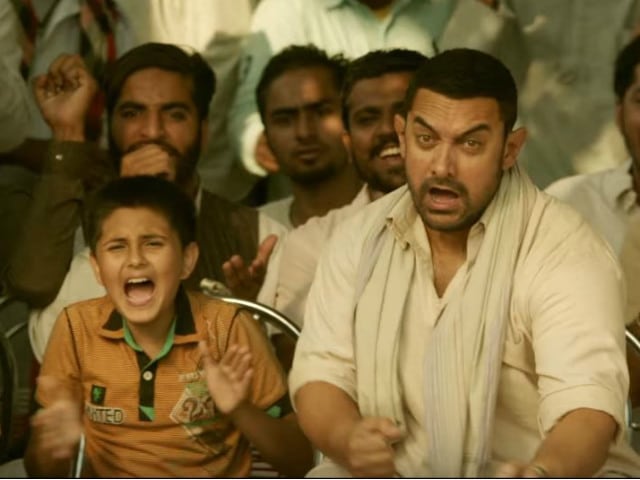 Aamir Khan in a still from Dangal

A day after Dhaakad, the second song from Aamir Khan's Dangal, was released, the actor shared a new poster from the much-awaited wrestling drama, and we love it. The new poster features Haanikarak Bapu Aamir and his Dhaakad girls in a typical village by-lane setting. Aamir, 51, plays the role of Haryanvi wrestler Mahavir Singh Phogat in Dangal, which is based on the true story of how the Phogat sisters were trained in wrestling by their father. Geeta Phogat was the first Indian female wrestler to win a gold at the 2010 Commonwealth Games. Her sister Babita kicked off with a silver medal at the same year, finally winning gold at the 2014 Commonwealth Games.
In the new poster, Aamir takes centre stage and is flanked by both the younger and older versions of the Phogat sisters, Geeta and Babita. Suhani Bhatnagar plays the short-haired, stout and determined young Geeta while Zaira Wasim features as young Babita. Sanya Malhotra and Fatima Sana Shaikh star as the adult versions of Geeta and Babita in the Nitesh Tiwari-directed film.


Hey guys, thanks for the fantastic response to Haanikarak Bapu & Dhaakad! Here is our second poster, hope you like it. Love. a. pic.twitter.com/lqL5LUjQla

The poster was heralded by the song Dhaakad. Watch here:

Aamir Khan, who has confessed to growing emotionally attached to the Phogat family since he began filming Dangal, was the guest of honour at the real life Geeta Phogat's wedding, which was held in the Haryani village of Balali last Sunday. Aamir arrived at the wedding with his Dangal co-stars including Sakshi Tanwar, who plays Aamir's wife in the film. 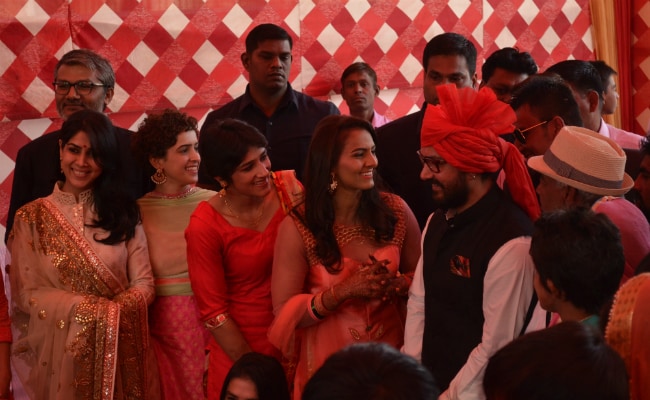 The first poster of the movie was released in July:

About his younger co-stars in the film, Aamir told IANS: "If I have to rate our performance in the film, I would say that these kids performed ten times better than what I did. No, I am not exaggerating anything. Once the film releases, the audience will understand. I have been working in the industry for last 25 years, but these kids are highly talented."
Interest in Dangal was piqued with a very muddy poster of Aamir last year:

Watch Aamir prepare his daughters for Dangal in Haanikarak Bapu:


Watch the trailer of Aamir Khan's Dangal here:
Aamir Khan, who never does things by half measures, put on 25 kilos to play Mahavir Singh Phogat as an older man. He then dropped the excess weight to play the younger version of the Haryanvi wrestler.
Dangal hits screens on December 23.