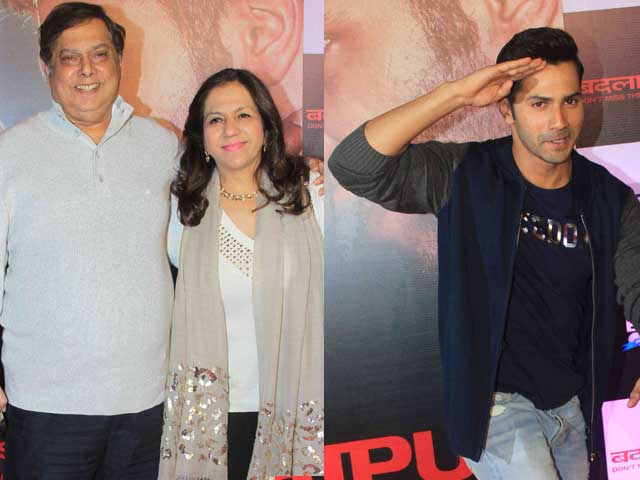 David, Karuna and Varun Dhawan at the success party of Badlapur

"I have seen so much of success till now but this success is at par and special for me," said David Dhawan

Actor Varun Dhawan has made his father, director David Dhawan, proud. At the success party of Varun's film Badlapur, Mr Dhawan said that he is "over the moon" after the success of his son's film.

For David, success of Badlapur is special as it has given a new identity to his son Varun".

"Today is a great day for me. I have seen so much of success till now but this success is at par and special for me," Mr Dhawan, known for hit films like Raja Babu, Coolie No. 1, Saajan Chale Sasural and Haseena Maan Jaayegi.

"I think I am one of the happiest fathers in the world," he added.

David Dhawan directed his 27-year-old son in the comedy Main Tera Hero and he is happy that his son's hard work in the dark and intense revenge drama Badlapur has paid off.

" Obviously he (Varun Dhawan) is my son but I think he has taken a very strong step to do a film like that. He has worked very hard on this film and it is evident also," the director said.

It was his own decision to do this film," he added.

Directed by Sriram Raghavan, Badlapur features Varun as an aggressive and rugged adman. Not only is the film doing well at the box office, but it is being appreciated by the critics as well.