Shah Rukh Khan and Alia Bhatt, co-stars of Dear Zindagi, spent part of Thursday responding to tweets from colleagues who have watched their film (Bollywood gets a preview in advance, of course). Dear Zindagi is already a hit with celebrities. Those who tweeted included Sushant Singh Rajput, Dia Mirza and Aditi Rao Hydari. Shah Rukh Khan, 51, plays life coach Jehangir or Jug to Alia Bhatt, 23, helping her character Kaira navigate boyfriend trouble. The verdict on Twitter: every one wants to go to therapy in the hope of finding their very own Jehangir. But there's only one Shah Rukh Khan, remember? Dear Zindagi, why so cruel?
Sridevi, who was the star of Dear Zindagi director Gauri Shinde's first film English Vinglish, said that Alia is like 'magic onscreen:'


Love you @gauris. So proud of you. #DearZindagi

Dear @aliaa08 you are magic on screen. #DearZindagi

Balki and @karanjohar you both are precious rocks to have supported Dear Zindagi. #DearZindagi@gauris@DharmaMovies

"Call me any time," SRK told Dia Mirza. "Was trying to call," he responded to Sushant Singh Rajput.


&I'm gently reminded again why I've been such a big fan of #shahrukh.You're what a lovely zindagi might just look like.@iamsrk love u a lot.

& @aliaa08 such precision, maturity & richness in emotions are so rare. I envy you & I hope i get to work with u some day :)
Great job.

Call me anytime and I will therapise for you. Keep smiling and thanks. https://t.co/VwbSmsH811

Shabana Azmi tweeted on behalf of her husband Javed Akhtar. Alia, in her answering tweet, urged her 'Khaala' to watch Dear Zindagi, saying she'd "love, love to hear (her) thoughts."


@aliaa08 I have yet to watch it but @Javedakhtarjadu has been gobsmacked by your performance in Dear Zindagi.Bless you dear one

A special screening of Dear Zindagi was held in Mumbai on Wednesday night. Shah Rukh Khan and Alia Bhatt were spotted being driven to the theatre. Their guests included Sridevi and her daughter Jhanvi Kapoor. A Sridevi song, Ae Zindagi Gale Laga Le from Sadma, has been used in this film. 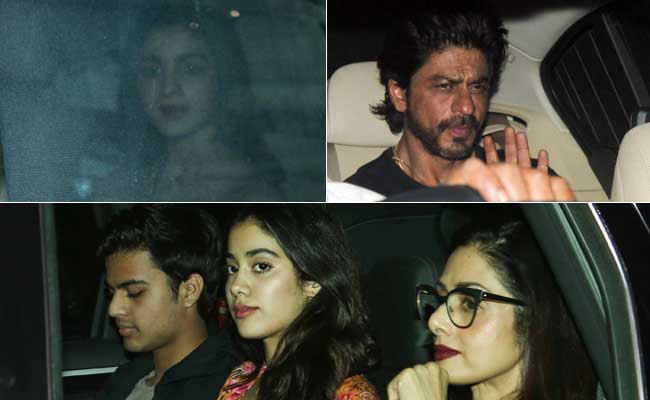 Aditi, Dia, Sushant, Sidharth Malhotra and several others from the film fraternity also watched the film on Wednesday. SRK and Alia were colour-coordinated in black: