Deepika Padukone, Ranveer Singh are fond of each other, says Sanjay Leela Bhansali 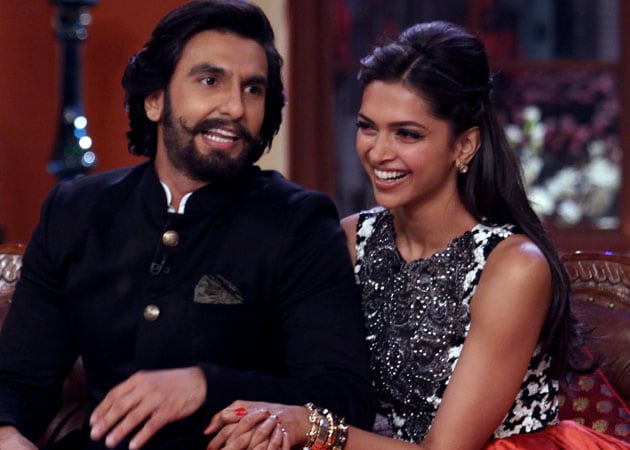 Ranveer and Deepika will feature together in Ram-Leela

The crackling chemistry on screen between the lead pair of Ram-Leela, Deepika Padukone and Ranveer Singh, results from the fact that the two actors are fond of each other and enjoyed doing the film together, says director Sanjay Leela Bhansali.

The crackling chemistry on screen between the lead pair of Ram-Leela, Deepika Padukone and Ranveer Singh, results from the fact that the two actors are fond of each other and enjoyed doing the film together, says director Sanjay Leela Bhansali.
Ever since the trailer hit the screens, the chemistry between the two has generated a lot of interest, which Bhansali feels will help the film.
"If in a love story, people are liking the chemistry of the hero and heroine and feeling their love then your love story has more chances of succeeding. The chemistry has come out so well on screen and the credit for it goes to the actors as they have got themselves involved into the plot and got into the skin of the character of being in love," Bhansali told PTI in an interview here.
"Whether there is something between them in real life or not is not my concern as a filmmaker.. I am excited to see them together on screen. They have done a wonderful job as actors. And chemistry is a natural vibe, when two people come together there is a vibe that happens or doesn't happen."
According to Bhansali, because the two actors are fond of each other and like to act, they enjoyed doing the film.
However, he feels the focus should be the film. "Actors have their personal fans... it is the audience that has to connect to the film.. that is important. Their chemistry does help the film."
In Ram-Leela, Bhansali has tried new things like adding a special song of Priyanka Chopra, a passionate kissing scene between the lead actors etc.
"One can't keep making same things again and again otherwise it will be boring for me as well as for the audience. So if you do something unexpected I like it and actors also enjoy it. It is important to reinvent to yourself according to time, thinking should change," he said.
He insists he did not add these things to make the film more viable commercially.
"It all depends on how you add such things, how it will suit, how you will present it etc. There is nothing that gurantees... what works at box office and what doesn't. These things are new to me so there is excitement. I have never made a sensual love story and more energetic or had a special song," he added.
Right from Khamoshi to Hum Dil De Chuke Sanam to Guzaarish and the latest Ram-Leela, Bhansali's films have always brought love and passion on screen.
The germ of the idea of Ram-Leela came to him when he was making Khamoshi but Bhansali couldn't take up this project due to financial and other reasons.
"I had thought about it (Ram-Leela) after Khamoshi, this film didn't do that well but got critical acclaim. I did not have enough money then to make a film like Ram-Leela. I made Hum Dil De Chuke Sanam which was set in Gujarat so a Ram-Leela would have appeared repetitive at that time. So, I waited for long time," he said.
This film is called as desi adaptation of Romeo Juliet and is set in Gujarat.
"I am Gujarati at heart I love Gujarat's music, culture and food and I want to take all this back to the people," he added.
The film is special and important to Bhansali and has dedicated it to his mother, whose name he has adopted as his middle name.
Releasing on November 15, Bhansali is happy with the response Ram-Leela is getting.
"People have liked the promo, songs, love story of Ranveer and Deepika. They are expecting a good love story and they should expect it. The scale is big, it is a colorful film... I am expecting people will like the film," he added.