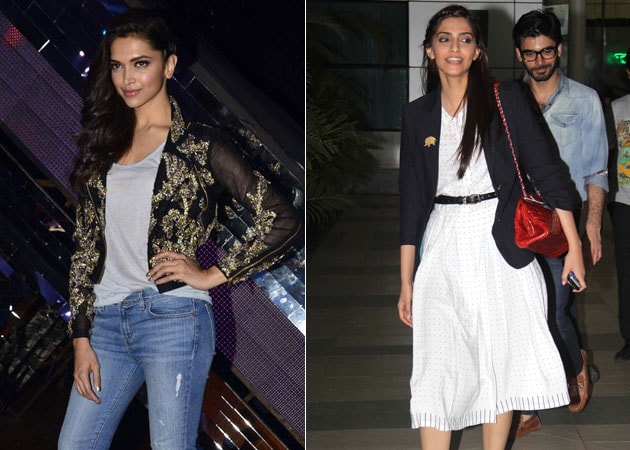 Deepika and Sonam are busy promoting their respective movies

Will Deepika continue to remain a step ahead on the success ladder with Finding Fanny or will Sonam take a lead this time with Khoobsurat?

In the mega clash of Om Shanti Om and Saawariya in 2007, debutante Deepika Padukone had emerged a clear box office-winner against first-timer Sonam Kapoor. Seven years later, the question is - will Deepika continue to remain a step ahead on the success ladder with Finding Fanny or will Sonam take a lead this time with Khoobsurat?

Both the films are releasing within a week's time this month.

Deepika's film is releasing on September 12, while Sonam's new offering hits the screens on September 19 - and both actresses are going out of their way to ensure their movies are promoted in the best possible manner.

Finding Fanny, an English language entertainer by Indian filmmaker Homi Adajania, is definitely not a movie that every actress would have risked doing - especially after delivering four back-to-back Bollywood hits like Race 2, Yeh Jawaani Hai Deewani, Chennai Express and Ram-Leela. But Deepika took up the challenge.

Nevertheless, one should give it to Sonam for choosing to step into the shoes of the enigmatic Rekha for Khoobsurat, the new age twist on the 1980 film of the same name, directed by Hrishikesh Mukherjee, which continues to have a dedicated fan following even today.

Both the actresses come from different backgrounds. Sonam comes from a family of actors and filmmakers - her father Anil Kapoor is a veteran actor, uncle Boney is a film producer and her youngest uncle Sanjay is an actor too. Deepika's father, Prakash Padukone, is the country's badminton icon.

Yet, it is Deepika who has managed to cement her space in Bollywood as a performer, better than Sonam, who has been more in news for her fashion sensibilities despite having the talent to play roles as different as in Aisha and Delhi-6.

After getting a perfect launchpad with Om Shanti Om opposite Shah Rukh Khan - which turned out to be a huge hit - Deepika proved her mettle with a mix of films like Bachna Ae Haseeno, Love Aaj Kal, Housefull, Aarakshan and Cocktail.

She had her share of flops too in the form of Chandni Chowk to China, Karthik Calling Karthik, Lafangey Parindey, Break Ke Baad and Khelein Hum Jee Jaan Sey - but some of her recent back-to-back gems have catapulted her into a league of her own.

Sonam, who made her debut with Kapoor scion Ranbir in Saawariya, on the other hand, has few hits to boast of in her filmography.

She bagged roles in big films like Thank You, Mausam and Players, but all bit the dust at the box office. Her work in Raanjhanaa was appreciated, but in Bhaag Milkha Bhaag, her appearance was as good as a cameo.

Earlier this year, Sonam was seen in Bewakoofiyaan, which didn't elicit the response she would've expected. She has great expectations from Khoobsurat, which promises to show her in an exuberant and lively look. Another highlight of the film is her pairing with Pakistani sensation Fawad Khan.

Meanwhile, Deepika is also hoping to strike gold yet again with the offbeat film Finding Fanny.

But there's no mean competition here - or so it seemed from photographs from a Finding Fanny screening, where Deepika gave Sonam a warm welcome in Mumbai.