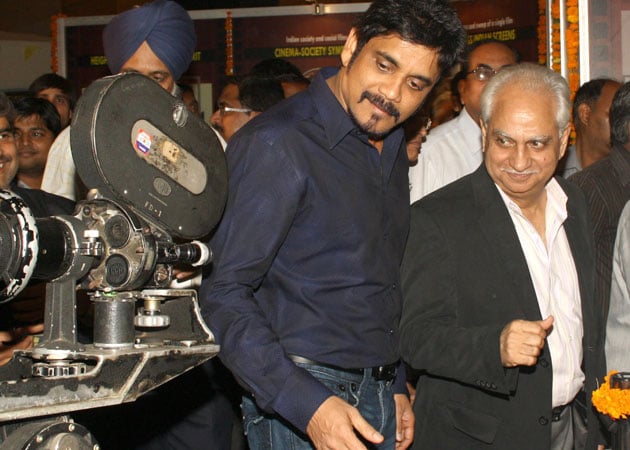 Nagarjuna and Ramesh Sippy at the inauguration ceremony of Centenary Film Festival in New Delhi.

In a show of solidarity and unity, representatives from India's multi-billion dollar, dynamic cinema world came together for the inauguration of the Centenary Film Festival here on Thursday evening.

If it was Ramesh Sippy and Vishal Bharadwaj from Bollywood, there were Nagarjuna Akkineni and Rana Daggubati from down south. In a show of solidarity and unity, representatives from India's multi-billion dollar, dynamic cinema world came together for the inauguration of the Centenary Film Festival here on Thursday evening.
There was even veteran Oriya cinematographer-filmmaker Apurba Kishore Bir, who shared the stage with Information and Broadcasting Minister Manish Tewari, as well as Information & Broadcasting Secretary Uday Kumar Varma. Together, they lit the inaugural lamp for the six-day extravaganza.
Southern star Nagarjuna made a poignant point.
"From the time I got into the film industry, I used to wish the line between north and south would vanish, and as we have approached the 100th milestone year, I see actors from south coming to north, and those from south coming to the north.
"It is the same with directors, who are increasingly picking from southern stories and vice versa. I think that is incredible," said the 53-year-old, who looked as fit as the 28-year-old Rana.
Meanwhile, Tewari said the idea behind the fest on Indian cinema, the nation's "soft power", was to create and curate a week-long event, which "truly epitomises the ethos of the country".
He spoke about how efforts for single-window clearance for foreign filmmakers as well as for leveling the "playing field" for Indian filmmakers too, are underway.
A highlight of the inaugural programme was the screening of silent film Throw of Dice, with a live musical orchestra by maestro Nishat Khan. The foyer area saw a display of old cameras with descriptions, which clearly gave one an idea of the progress the country's cinema industry has made over a century since silent film Raja Harishchandra was made in 1913.
Over the days,the festival will host screenings of some classics as well as contemporary Indian films by master directors such as Bimal Roy, Guru Dutt, Shyam Benegal, Adoor Gopalakrishnan and their ilk. The fest is being celebrated in Siri Fort Auditorium as well in venues such as Jamia Milia University, Jawaharlal Nehru University and India Habitat Center.The Siri Fort Auditorium complex was well-lit and done up with posters of old films to suit the occasion.
Another key highlight of the festival is the 'Cut-Uncut', a three-day workshop conceived and being executed by members of the Central Board of Film Certification.
A special Satyajit Ray retrospective and display of artwork of Ray, has also been arranged to pay homage to one of the best-known ambassadors of Indian cinema.
A play on the life and times of Dadasaheb Phalke by Aamir Raza Hussain would mark the end of the festival on April 30, while the centenary celebrations will culminate in the National Film Awards ceremony at Vigyan Bhavan on May 3.
Watch: