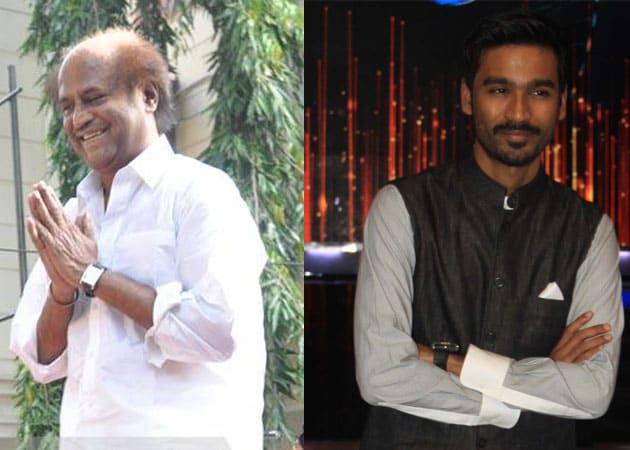 Tamil actor Dhanush, who is awaiting the release of his first Hindi film Raanjhanaa, says even though superstar Rajinikanth has a lot of influence on him, he doesn't like being compared with his father-in-law.

Tamil actor Dhanush, who is awaiting the release of his first Hindi film Raanjhanaa, says even though superstar Rajinikanth has a lot of influence on him, he doesn't like being compared with his father-in-law.
"I grew up watching his films and therefore there might be his influence on me, but I don't like to be compared with him," said Dhanush.
"He is a legend and I'm only 26 films old. How can you possibly compare me with him," he asked.
Director Anand L Rai has transformed the southern star into a typical desi guy from Benaras for Raanjhanaa. But for Dhanush, the character was no different from playing a lover boy in a Tamil film.
"It was just another film for me. After hearing the script, I realised that the character was very similar to the lover boy I have played in several Tamil films. I knew I had to play a lover boy again, but in a different place and language and, therefore, I had nothing to worry about," said the actor, who has teamed up with Sonam Kapoor in the love story.
"Anand wouldn't have offered me the project in the first place had he not believed in me. The faith factor touched me and I was convinced that I had to do the project," he added.
Raanjhanaa is the love story of a Muslim girl and a Hindu boy.
Does he think his fans will accept him in a romantic hero's role?
"I'm not a judge of my films and I don't know how my fans in Tamil Nadu will react to Raanjhanaa. We have dubbed the film in Tamil hoping it will impress my fans, but I don't know if I can assure you they will like it. I hope they do and I'm waiting to see how they will receive it," said the 30-year old actor.
Raanjhanaa is coming out on Friday (June 21, 2013), while its Tamil version Ambikapathy will hit the screens a week later.
For Dhanush, working in Bollywood is almost similar to doing movies in the Tamil film industry. The only difference he can point out is the exhausting promos.
"In the south, we usually give a bunch of interviews and we are done, but in Bollywood, promotions are really exhausting. We travelled to nearly 15 cities to promote Raanjhanaa, but down south, seldom do we go to other cities to promote our films. This is the only difference I find between the two industries," he said.
He, however, admitted language was his biggest barrier while doing Raanjhanaa.
"I almost gave up dubbing because learning Hindi was a Herculean task. But Anand and Sonam never gave up on me and I'm thankful to them. I still haven't mastered the language and I think I will take more time," the actor added.
How did a Tamil actor end up in Bollywood?
"Anand watched my National Award winning Tamil film Aadukalam and decided to cast me. Even though I was sceptical initially, the faith that Anand had in me eventually led me to sign the project," he said.
Dhanush has also signed another film with Anand and says it was out of mutual respect for each other.
"You can't always expect to work with a director who guarantees success. Anand and I have developed mutual respect for each other. Precisely this is why I have teamed up with him even before the release of my Hindi debut," he explained.