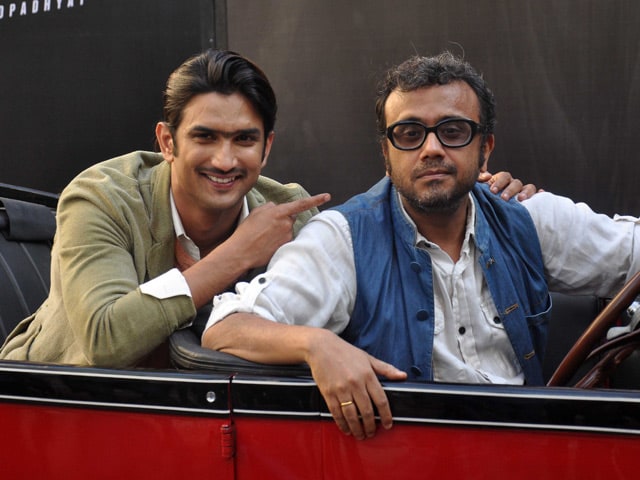 Dibakar Banerjee and Sushant at an event to promote Detective Byomkesh Bakshy!.

Bringing detective Byomkesh Bakshy alive on celluloid was Dibakar Banerjee's childhood dream but the director said that the project was scary and challenging to tackle.
A fan of Sharadindu Bandyopadhyay's stories since the age of 13, Dibakar said he wanted Detective Byomkesh Bakshy! to be his first project but he is glad that he took over the movie only after gaining experience but it was bewildering all the same.
"This film was different from anything that has been done or anything that I have made. We spent sleepless nights agonising over it. It was scary and a different animal and we just wanted to tame it," Dibakar told PTI. (Also Read: Here's How You Can Get Byomkesh Bakshy! Look of 1940s Kolkata)
"There was never a time when I did not want to make it. I knew it will happen. When you make films, you start believing in destiny a bit because no matter how hard you push it will be made when it is destined to be," he said. (Also Read: Sushant Singh Rajput on What Makes Him a Different Byomkesh Bakshy)
The director, known for his interesting take on contemporary issues in films like Khosla Ka Ghosla, Oye Lucky Lucky Oye and Shanghai, has set the film starring Sushant Singh Rajput, in the politically volatile era of 1940s Kolkata.
Dibakar said while there were seeds of the time and space in the author's stories that start from the '30s and go till '60s, he picked up the '40s because it was the most interesting one. (Also Read: Here's How You Can Get Byomkesh Bakshy! Look of 1940s Kolkata)
"I like the vibe of Calcutta in the '40s. It was the frontier post of the allied forces and Japan was trying to attack India through North-East to capture the port city. There was Netaji Subhash Chandra Bose and the Quit India movement. It was politically a very volatile period. Calcutta was under the shadow of war. It was a huge sea port for allied forces and like every war there was gangwar, drugs and weapons smuggling. Bengal famine actually happened because allied forces diverted foodgrains to Greece to feed the army. I wanted all of this for my backdrop," the director said. (Also Read: 'Detective Byomkesh Bakshy! to Have New Legendary Villain')
When asked whether it was difficult to put so many things in the backdrop, the director said that it evolves gradually in the movie.
"It's the skill of the writer and director to keep the background and foreground different but to keep the relation between the two. What happens in Detective Byomkesh Bakshy! is that it starts as the backdrop and suddenly you realise that it was the foreground all along. Byomkesh did not know it, and when he realises it, he understands that this mystery is too big to handle for one man," he added.
Detective Byomkesh Bakshy! also stars Anand Tiwari and Swastika Mukherjee in principal roles. The movie, produced by Dibakar Banerjee Productions and Yash Raj Films, is set to release on April 3.