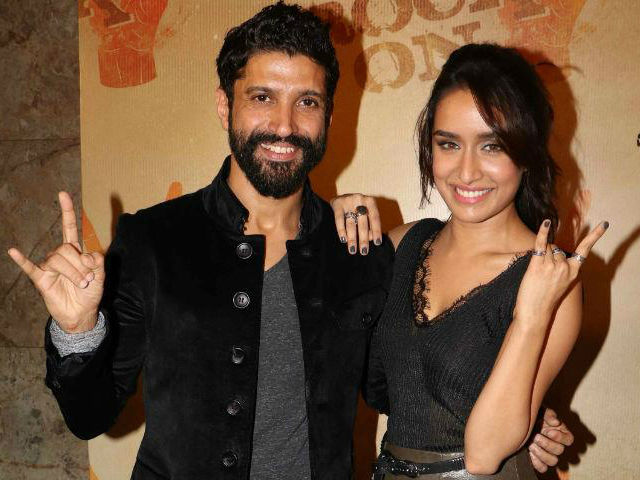 In one of her first interviews of 2017, Bollywood actress Shraddha Kapoor gave aclarification on her relationship status with her Rock On 2 co-star Farhan Akhtar. In an interview with the Times of India, the Aashiqui 2 actress denied a recent rumour according to which Sharddha's father actor Shakti Kapoor forced her to leave an apartment she reportedly shares with Farhan. "I got a message from someone telling me about this article, and initially, I was amused. While it doesn't make a difference to me because I know it's not true, it's sad that these false stories go so far that people forget we are human, too. Of course, we are actors and there will be people who would probably want to read something gossipy about us, but when it involves my father, my aunt and my co-star, it's taking it too far," Shraddha told TOI.
Shraddha, 29, featured in the sequel to Farhan's film in which she played the role of a Shillong-based local talented singer, who had to break free of her father's oppressive regime to make a name for herself in the music industry. The opportunity was presented to her by Farhan, who was also haunted by the ghost of his past which so far kept him away from his passion.
Shraddha was linked to Farhan, 42, who separated from his wife Adhuna Bhabnani in February last year. Before Shraddha, Farhan was linked to his Wazir co-star Aditi Rao Hydari while Shraddha was said to be dating Aditya Roy Kapur when they were filming their 2012 musical Aashiqui 2. "Well, I was even linked with Aditya for a while. Like I say, actors are linked all the time. But when family members are dragged into it, it's taking it to another extreme," she told TOI.
Shraddha Kapoor has re-teamed with Aditya Roy Kapur, this time under the directorial wing of Shaad Ali who is remaking Mani Ratnam's Tamil film OK Kanmani in Hindi as OK Jaanu. The Tamil film was a mega hit and the many variables in the project spell success for OK Jaanu too. The film is produced by Karan Johar's Dharma Productions while the music is composed by AR Rahman. OK Jaanu is a tale of Aditya and Tara who do not believe in the institution of marriage and decide to live-in together until they get admission into universities of their choice which will take them to two different continents. In real life, Shraddha believes in "to each his own" policy when it comes to live-in relationships.

"Yes, I am living in with my parents. I was born and brought up in this house. It's a joke within the family that I will bring my husband home. It's because I'm so happy living with my family. I have a house of my own where I have my meetings and keep my extra stuff. I have no intention of moving out of my parents' home and moving into my own apartment, let alone someone else's. About live-in relationships in general, I believe in live and let live. If it suits somebody and someone is happy, then it's totally fine - to each his own," she told Times of India.
After OK Jaanu releases on January 13, Shraddha Kapoor will look forward to the release on Mohit Suri's Half Girlfriend with Arjun Kapoor and Apoorva Lakhia's Haseena: The Queen of Mumbai.