Did the campaign for pardon help Sanjay Dutt? 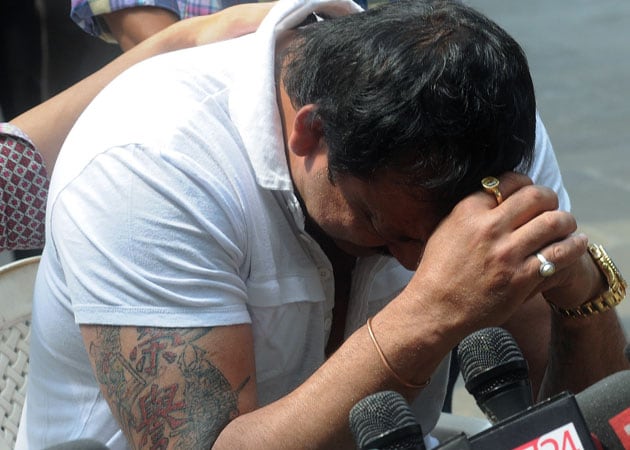 Sanjay Dutt broke down while addressing the media about the Supreme Court verdict.

Following Sanjay Dutt's emotional appeal to be allowed to follow the Supreme Court verdict, the plea within Bollywood for the actor's legal pardon has considerably diminished.

Following Sanjay Dutt's emotional appeal to be allowed to follow the Supreme Court verdict, the plea within Bollywood for the actor's legal pardon has considerably diminished.
Subhash Ghai who is very close to Dutt and his family jumped to the beleaguered star's defence arguing, "Sanjay Dutt appealed to the media as he did not want his case to become a tamasha. If we his supporters, friends and well-wishers feel he should be pardoned then we all should appeal to the Governor. As per the law anyone can appeal to the Governor for pardon. Khaali tamasha dekhne mein kya faayda? (What's the point in just watching the spectacle?).
Sanjay is pained. We should all pray for him."
Sense
Actress Raakhee Gulzar who was the only prominent member of the film fraternity to come out in the open and suggest that Sanjay Dutt serve his jail sentence with dignity, was relieved to hear the actor declare that he desired no clemency. "Better sense has finally prevailed. The clamour for pardon should stop automatically unless the press meet was a new strategy," says Raakhee.
Raveena Tandon who considers Dutt her buddy angrily lashes out at Dutt's friends for their campaign for pardon. "These pardon calls have done more harm than good. Sanjay should have come out earlier with what he did at the press meet on Thursday, and the honourable courts may have decided to release him from prison after a few months on the basis of his behaviour. But now I feel because of these silly pardon calls the honourable court won't change its mind."
Strategy
In fact, the emotional press address on Thursday morning is being seen by a section of the entertainment industry as a very clever marketing strategy planned by Dutt's close friends and his public relations (PR) machinery.
One of the star's leading ladies on condition of anonymity said, "All this tamasha over his going back to jail is nothing but insurance for the future.
Actresses, co-stars and filmmakers feel that if Dutt doesn't go to jail, he will remember those who pleaded for his pardon. Inwardly no one gives a damn.
No one bothered to cancel Holi celebrations after the Supreme Court's verdict on Dutt. In fact I attended a party where the host, known to be extremely close to Dutt, told his guests not to talk about the party. 'Ussko (Sanjay Dutt) pataa chalega to achcha nahin lagega,>/i>' the host said. So it's most about seeming to share the spirit of solidarity rather than actually feeling any genuine concern for him."
Adds the actress, "Sanjay has been generous to a fault. I read how he gave away a watch worth Rs 8 lakh to an action director. He has anonymously given charity to hundreds of needy people. He has stood by his friends in the film industry. Let's see how many of his friend stand by Sanjay's wife and kids when he is away."
Respect
Speaking on behalf of a sizeable part of the industry, filmmaker and industry spokesperson Ashoke Pandit says, "All those asking for Sanjay Dutt's pardon have done him more harm than good. They should respect his and his family's wishes and stop trying to operate a 'Save Sanjay Dutt' cottage industry within the film industry. I think Justice Katju should have been asked to restrain himself by Dutt's legal team. I don't think anyone has the right to speak on behalf of Sanjay Dutt without his permission."
Thinker, columnist, filmmaker Pritish Nandy, however, feels Dutt's well-wishers are within their rights to campaign for his pardon. "Why should people who think he should be pardoned seek his approval to do so? When I recommend Malala for the Nobel Prize do I seek her approval? When I ask for Raja to be punished for stealing, do I first seek his approval? People do what they feel is correct and apt."
Illogical
Actor Raza Murad can't fathom the logic behind the 'Save Sanju Baba' campaign. "There is a saying in Urdu, 'Muddayi sust gawah chust.' (The petitioner is least bothered but the witness in the case is over enthusiastic.) Sanjay has clearly stated that he is not asking for pardon. He has his family. His sister is a Member of Parliament. They are people who know exactly what to do. They must have taken the best legal advice available. Why are others jumping into the sensitive legal issues? Some self-styled advocates are trying to grab headlines by shedding crocodile tears and crying themselves hoarse just to be in the news. They aren't helping Sanjay's cause at all."
The inimitable Raza Murad ends with a joke about a visiting statesman from a neighbouring country who desired to meet the top five actors of Bollywood.
"As per his wish, five of the Khans were lined up for introduction. One by one, they were introduced to the Statesman. He said about the first four Khan superstars, 'Of course I recognise them. Who doesn't know them?' But when the Statesman came to the fifth Khan superstar he failed to recognise him.
'That's Khan-ma-Khan,' said the person introducing the last Khan to the Statesman. I feel people from our industry are queuing up for the heck of it, Khan-ma-Khan."