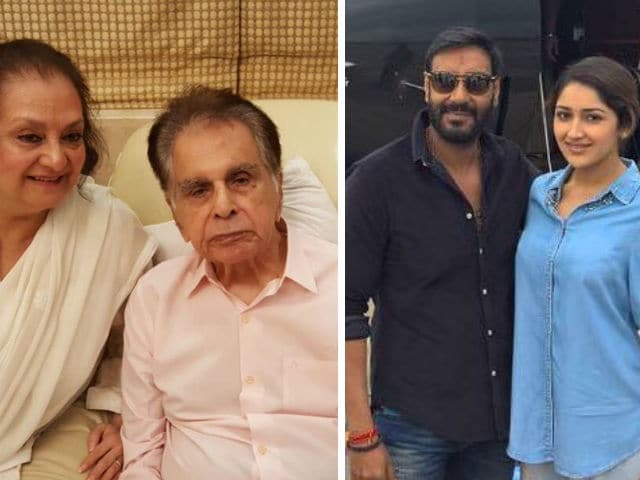 Actress Sayyeshaa Saigal, set to make her Bollywood debut with Ajay Devgn's Shivaay, says her granduncle and legendary star Dilip Kumar is thrilled about her entry into Hindi cinema.
Sayyeshaa is the daughter of actors Sumeet Saigal and Shaheen Banu, and the grandniece of actors Saira Banu and Dilip saab.
"He (Dilip Kumar) was excited about me entering the film industry. After such a long time there is someone in the family who is getting into the film industry. He blessed me," Sayyeshaa told PTI.
The 19-year-old actress reveals she is a fan of Kumar and likes his movies including Saudagar, Ram Aur Shyam, Mashaal.
"I am fond of these films. He has a great command over the Urdu language. There is a lot that I have learnt from him in this sector (industry). Sitting with him at any point is constant learning. He is very well read," she added.
Dilip saab and Saira are both looking forward to the release of Shivaay, which hits cinema houses on October 28.
Here's Sayyeshaa in the latest track from Shivaay, Tere Naal Ishqa:

"They are happy and waiting to see the film. They saw the trailer and it has less of me, so they asked when would I have a proper appearance. I will definitely show them the film," says Sayyeshaa.
Talking about her granduncle, the newcomer says he speaks less and doesn't go out much now.
"It's sad when people get old. But still with his age he has his own hair, teeth and has no glasses and it's fantastic. He speaks less now and goes out less. I miss that but he is still there and that is the best part," said the actress.
(This story has not been edited by NDTV staff and is auto-generated from a syndicated feed.)