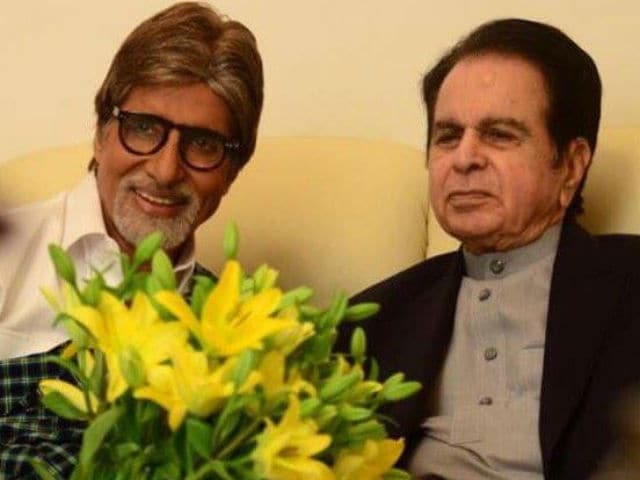 Actor Dilip Kumar, 93, spent the weekend in Mumbai's Lilavati Hospital and his family rushed to reassure fans that the Grand Old Man of Indian cinema was making a quick recovery. Dilip saab's co-stars Amitabh Bachchan and Rishi Kapoor added their voices to that of the actor's wife Saira Banu.
Early Saturday morning, Dilip saab was taken to hospital after he had trouble breathing. Later that day, his Duniya co-star Rishi Kapoor tweeted a medical bulletin that showed Dilip saab and Sairaji in the hospital room:


Yusuf uncle is well as we can see at the Leelavati Hospital with Sairaji. Happy Home Tidings! pic.twitter.com/eg62PFhxUW

Amitabh Bachchan, who worked with Dilip Kumar in 1982's Shakti, said on Twitter that the senior star was "doing fine." On Facebook, he posted several pictures of himself with Dilip saab:

Saira Banu's manager Murshid Khan has told news agency IANS that Dilip saab is recovering and may be discharged on Tuesday. "Dilip sir is fine now and all his reports are also normal. Once doctors give a heads up, he will probably get discharged by tomorrow," Mr Khan told IANS. (Also Read: Dilip Kumar is Fine, May Get Discharged Tomorrow: Saira Banu's Manager)
Dilip Kumar was born Mohammad Yusuf Khan and his six-decade career is studded with acclaimed classics such as Madhumati, Devdas, Mughal-e-Azam, Ganga Jamuna, Ram Aur Shyam and Naya Daur.
Dilip saab, who married actress Saira Banu in 1966, is well-known for playing tragic heroes in films like Andaz, Baabul, Mela, Deedar and Jogan. He was last seen in 1998 film Qila.
Dilip Kumar's many awards include the Padma Vibhushan, which he received in 2015. He was honoured with the Padma Bhushan in 1991 and the Dadasaheb Phalke Award in 1994. He was the first winner of the Filmfare Best Actor award - for 1956's Azaad - and shares the record for the most wins - eight - with Shah Rukh Khan. Dilip saab also received the Filmfare Lifetime Achievement award in 1993.