A source close to the development said, "For reasons best known to the makers, Disha has made way for Sara." 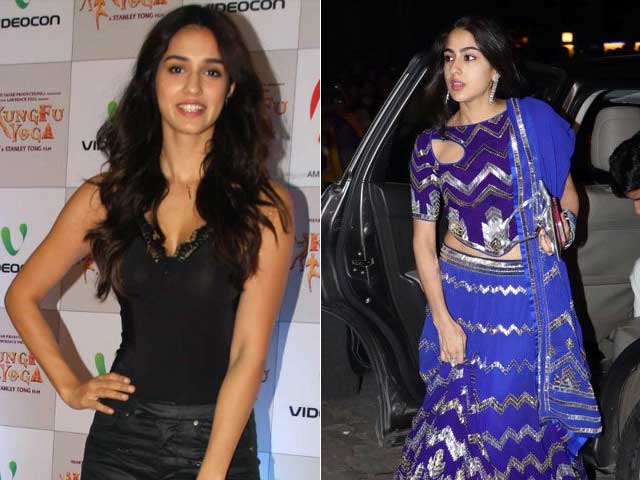 There's a new update (concerns Disha Patani) on Saif Ali Khan's daughter Sara Ali Khan's Bollywood debut. Actress Disha Patani has reportedly been replaced by Sara in the sequel of Student Of The Year, which will be directed by Punit Malhotra and produced by Karan Johar. Disha was initially zeroed in for the role opposite rumoured boyfriend Tiger Shroff in Student Of The Year 2 but has eventually been replaced by Sara, reported DNA. A source close to the development told DNA, "For reasons best known to the makers, Disha has made way for Sara." Meanwhile, the Dil Chahta Hai actor recently confirmed that Sara Ali Khan will be launched by Karan, reported Pinkvilla. Earlier, it was reported that Sara's maiden Bollywood film could be Karan Johar's remake of Marathi film Sairat. A film with Hrithik Roshan, also to be directed by Karan Malhotra, was also cited as a possibility for Sara's big break.
Three-film-old Disha Patani was reportedly roped in for Student Of The Year 2 because Tiger wanted her to be taken on board. The source told DNA: "Disha was finalised as Tiger was keen to have her in the film. It would mean that this off-screen pair would finally woo each other on-screen and that's also interesting for the audience. Producer Karan Johar and director Punit agreed to Disha, as she has a pleasing personality and is confident on screen, as seen in her last release M S Dhoni: The Untold Story and Kung Fu Yoga with Jackie Chan. But for reasons best known to the makers, Disha has made way for Sara."
"This is another case of an outsider losing to a star kid. KJo was always planning to launch Sara, but her name was mentioned in connection to the remake of The Fault In Our Stars with Shahid Kapoor's brother Ishaan Khattar. But that didn't work out. Karan is very secretive about his films and he likes to announce them himself. They are holding this bit of news close to their heart because they were not happy with the news of Disha being cast, coming out," DNA quoted the source as saying.
Saif, who is all set for the release of his new war drama Rangoon, told Pinkvilla, that he is "pleased" with the fact that Sara's Bollywood debut is with Karan. "I am very happy she is working with Karan Johar because I think he is brilliant with newcomers and he will launch her correctly. He is a very intelligent and a passionate filmmaker and he understands films. I am very pleased that she is with him," Saif told Pinkvilla.
Sara Ali Khan (Saif's daughter with first wife Amrita Singh) is a regular at Bollywood parties and recently graduated from Columbia University in New York. Disha Patani has featured in films like Loafer and M.S. Dhoni: The Untold Story, and was last seen in Indo-Sino project Kung Fu Yoga, co-starring Jackie Chan. Disha and Tiger also featured together in the single Befikre.