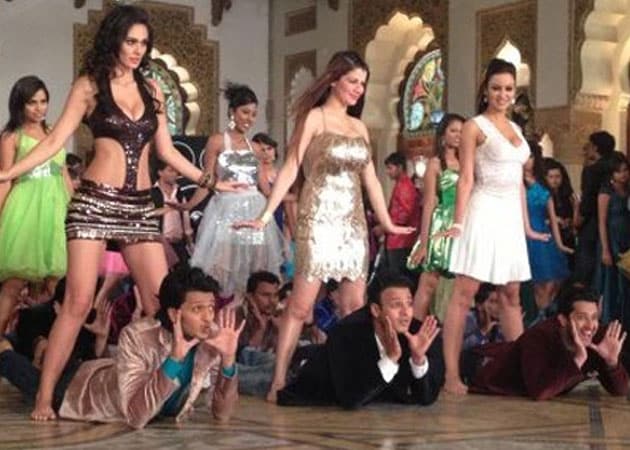 Kainaat (centre) in a still from the movie Grand Masti 2

Having made an entry in Bollywood three years back with an item song in Akshay Kumar starrer Khatta Meetha, actress Kainaat Arora is finally making her acting debut in Indra Kumar's Grand Masti.

Having made an entry in Bollywood three years back with an item song in Akshay Kumar's Khatta Meetha, actress Kainaat Arora is finally making her acting debut in Indra Kumar's Grand Masti.
The model-turned-actress says she is proud that she bagged the role after seeing off competition from 200 other girls during the audition of the film, which is a sequel to the 2004 hit Masti.
The film will feature Vivek Oberoi, Aftab Shivdasani and Riteish Deshmukh reprising their roles from the original.
"I bagged the role through the writer of the film, Milap. He approached me for this role and he said he was looking for a girl opposite Vivek. He said they had already tested 100 to 200 girls for the role.
"I went for the audition and the next thing I heard was that I was on board. I am the lucky one from those 200 girls who finally bagged the role," Kainaat said.
Besides the lure of working in a successful franchise, the newcomer says it was the opportunity to work with filmmaker Indra Kumar that drew her to Grand Masti.
"Masti was a big hit and when I got an opportunity to work in the sequel opposite Vivek, I just jumped into that without even thinking twice. Moreover it is an Indra Kumar film. He is a very sensible and senior director and I would have been a fool to say no to such a film," Kainaat said.
Other than Kainaat, Grand Masti also stars Bruna Abdullah, Karishma Tanna, Sonalee Kulkarni, Maryam Zakaria and Manjari Fadnis. The film will hit theatres on September 13.
When asked about her character in the upcoming adult comedy, Kainaat says she plays a nervous, nerdy girl, who later turns into a glam doll.
"I am basically playing two characters in the film. In the beginning, I am this nerdy girl. Something like the Ugly Betty. She is very geeky, wears braces, carries a water bottle and school bag in college. But at the reunion everyone is surprised as my character has completely transformed into a beautiful, desirable girl," she said.
After doing the item song Aila re Aila in Priyadarshan's Khatta Meetha back in 2010, Kainaat was offered many others in various films.
But the actress declined them all as she did not want to get typecast and waited for the right role to come her way.
"It is a human psyche. When you do a song, people will only approach you for songs. I did not want to do another song after Khatta Meetha. I was very adamant that I would only do a film. Hence I waited and I am excited that I am finally making my debut with Grand Masti," Kainaat said.
The young actress will do an item song in Vikram Bhatt's Hate Story 2.
"I decided to do a song now because New Year is coming and I thought of doing another hit song. The film is being produced by Vikram Bhatt and the shooting will begin later this month," she said.
Kainaat, who is the cousin of late Bollywood actress Divya Bharti, says she is inspired by the Deewana star.
"I hope if I even do little bit of what she did in the two short years of her career, my life will be sorted out," she said.