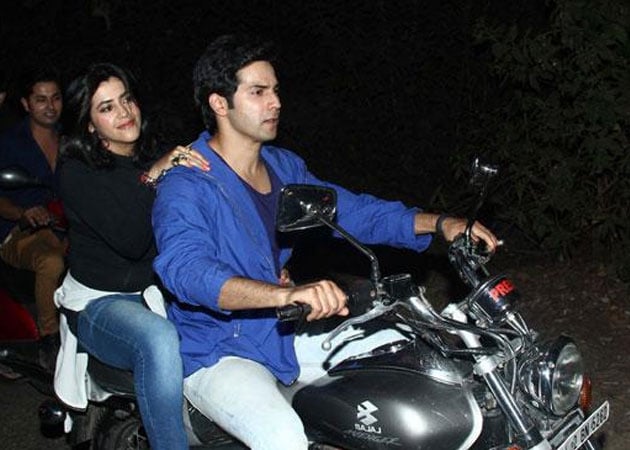 Ekta on a bike with Varun.

Varun Dhawan took his film Main Tera Hero's co-producer Ekta Kapoor for a bike ride to promote the film on March 31. But due to her fear of two-wheelers, she found the experience tough.

Varun Dhawan took his film Main Tera Hero's co-producer Ekta Kapoor for a bike ride to promote the film on March 31. But due to her fear of two-wheelers, she found the experience tough.
Her fear is due to an incident that happened in her childhood.
"It was very tough because I have not even sat on a cycle in my life. I did twice as a child and it (the cycle) fell on both the occasions. My father used to hold the cycle and balance it. The moment he left the cycle, the cycle fell and I fell too," the 38-year-old said here after riding pillion.
"I rode the bike for the first time and I can't tell you the number of hate mails I have got from various women for riding on a bike with Varun," she added.
Apparently, Varun coerced Ekta to agree to a bike ride and Ekta says she finds Varun too cute to refuse him for anything.
"I have not met a cuter guy than Varun. He can sell ice cream to an Eskimo. Forget riding the bike, if he tells me to go to the moon with him, I will. He is so cute," Ekta said.
Varun said if it was not for Ekta and his father David Dhawan, he couldn't have thought of doing all the things that he was for the film.
"For this film, I have been pushed by two people - one is my father and the other is Ekta. Both of them share one thing in common, which is passion for films. Honestly, most of the things I have done today, nobody would have let me do them or orchestrated them if Ekta wasn't there," the 26-year-old actor said.
Varun's father David Dhawan has directed Main Tera Hero, which also features actresses Nargis Fakhri, Ileana D'Cruz and Evelyn Sharma. The film hits theatres on April 4.