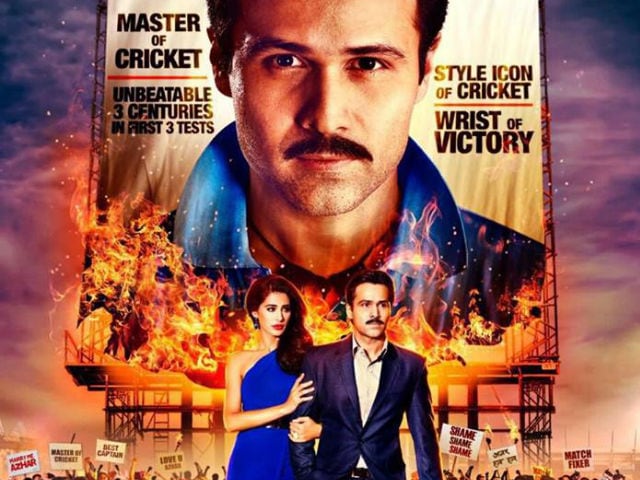 A poster of the film Azhar

Even before its release, former cricketer Mohammad Azharuddin's biopic has raised eyebrows of the people shown in the sports drama and its lead star Emraan Hashmi said that he is not surprised given the subject of the film.
Directed by Tony D'Souza, Azhar chronicles the life of Azharuddin, who was implicated in a cricket match-fixing scandal in 2000, and banned by BCCI for life. In 2012, however, the Andhra Pradesh High Court lifted the ban, describing it as "unsustainable."
There were reports that Azharuddin's former wife Sangeeta Bijlani and popular cricketer Manoj Prabhakar are set to sue the makers of the film for showing them in a bad light once the film releases.
"We knew that this film will ruffle a few feathers because he was controversial and everyone got a perception. When you are showing it through one person's point of view, other people will feel the reality is something else," said Emraan told PTI.
"All these controversies were expected and I think when they will see the film all these speculation can go either ways. It could make things or worse or it could make them feel that they were over-reacting," he added.
The Mr X star said that he did not have an iota of doubt to portray the tainted cricketer onscreen as there were many facets to his story.
"I was actually very excited to play him. I felt there is a very special story about his life. His humble beginnings in Hyderabad, how he came to the Indian cricket team, became the captain and led India to so many victories," said the 37-year-old actor.
Emraan was intrigued by the stories regarding Azharuddin's match fixing scandal.
"It's a story of a fallen hero, which I found interesting. It is tragic when someone's life is snatched away from him," he said.
Azharuddin was involved with the film right from its inception and also helped Emraan to know more about him.
"He's a great teacher. We bonded over a lot of conversations about his life. I had to understand his better. There was practice session for almost 3 hours everyday and I used to watch him and imbibe things from his game," he said.
The film stars Nargis Fakhri as Sangeeta while Rock On! actress Prachi Desai is portraying Azharuddin's first wife Naureen.
Even Nargis is not happy with the way her character has shaped up in the film as the actress had claimed that she was not aware of the kissing scenes in the movie.
"I don't know why she is saying that now. But as far as I know, she definitely knew about the kissing scenes. When she is doing a film with me, then there is no brainer, right," he said.
Produced by Shobha Kapoor, Ekta Kapoor and Sony Pictures Networks, Azhar releases this Friday.