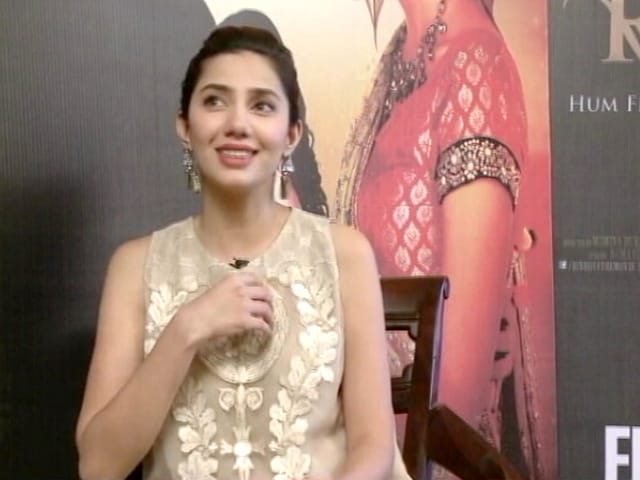 Mahira Khan during an interview with NDTV.

Pakistani actress Mahira Khan is all set for her first steps in Bollywood and with no less than Shah Rukh Khan, in Rahul Dholakia's Raees. The actress, who became a household name in India after her stint in Pakistani TV show Humsafar with actor Fawad Khan (who made an impressive Bollywood debut in Khoobsurat last year) talked about her foray in the Hindi film industry and her films back home - Bin Roye and Ho Mann Jahaan.
In an exclusive interview to NDTV, Mahira talked about her transition from the small screen to the big screen, Shah Rukh Khan, and more.
Of her foray in Bollywood, Mahira said: "I don't know how people will take to me over there (Bollywood). But it was a very different experience. I went there like a sponge. I was just taking it all in. I didn't want to step in on anybody's toes. Because here, I'm very nosy. I'm in everybody's space and job. And everyone warned me not to do this there. So I just sat, listened to them. I tried to match Mr Khan. I couldn't, but I tried to make it better."
Talking about her Raees co-star, Mahira said: "I got to learn so much from Mr Shah Rukh Khan, like actually got to learn from him. I realized this when I came back. I came back and I shot for a song in Ho Mann Jahaan and my director was like, 'What has happened to you'. He actually said that 'you've shed a layer. You've grown as an actor.' And I think it's because I moved out of my comfort zone. At that time you don't realise it because it's happening so fast. But when you come back you realise, 'Oh, I've learnt something'.
Mahira however not only praised King Khan, but also her crew in India, which was like home away from home for her.
She said, "The people were very kind and the crew was amazing. The crew was rooting for me. Even when I couldn't get a dialogue right or a dance step right I could see them encouraging me. It was really nice. That's what happened here (in Pakistan). I thought I'll miss it there."
"Sometimes I used to miss home, but that was the initial 10 days or so, when I was getting into character. After that they were all my people. Now that I'll go back again, I will be a lot more confident and happier. I know that I'm going back to these people," she said.
Back home, Mahira is famous for her roles in TV shows like Humsafar, Shehr-e-Zaat and Neeyat. And while some find the transition from the small screen to the big screen different, for Mahira, it was only about acting.
She said: "I don't find it different. There's a camera, there are people and there's a director, there's a script. So I don't find it any different. But yes, when I did Bin Roye (which I did while shooting for a drama) and then I did Asim Raza's (director) film - Ho Mann Jahaan - then I realized that there is a difference. And the difference is that it is larger than life."
"My first ever performance was in a film - Bol. It was a very tiny role, but it was a film. Then I came into drama, which became very successful. What I like about the films compared to drama is that it's (films) not a never-ending story. It's not repetitive. You are going to entertain for two hours, so you can't b repetitive. In drama, you are coming on screen every Friday, so you have to remind the audience what happened last Friday. So, that's the only difference. There is no other difference. For me, it's only acting," she added.
And even though Mahira carved a niche for herself as Khirad of Humsafar, and Falak from Shehr-e-Zaat she wanted to switch her modus operandi and switch to film.
"I have invested two years of my life in Bin Roye, and solely because I had decided that I don't want to do drama. And this was right after my serial Shehr-e-Zaat, which I did after Humsafar and everyone told me that 'No one does this. What are you? You are just 2-3 serials old. Who does that?'. But the scripts that came sounded similar, even though some were amazing. But I thought that we are film ready. We are an industry, which is ready to get into films full throttle," said the actress.
"And then Bin Roye ran into a few issues and difficulties. And I stayed with it for 2 years and I came out as a better actor, maybe. It taught me so much. I don't think I'll ever invest so much, emotionally in another character or film. It will break my heart if people don't see that," she added.
Talking about her two films back home, she said, "From Bin Roye I went to Ho Mann Jahaan. From Saba, who is complex, doesn't know anything, immature. She's brash and rash. She's complicated. She's passionate and obsessed. She is everything that Manizeh, from Ho Mann Jahaan, is not. Manizeh is knows her mind, she's mature. She a cool girl; she's the quintessential girl of today."
"They were such different characters that I had trouble getting into Manizeh's shoes. Asim used to be like, 'What are you doing, why are you making your dialogues dramatic'. And I realized that I was still in drama mode. So I had to really break away from Saba to be more like Manizeh. And then from there I did another song for Bon Roye, where I was the confident girl like Manizeh. I was like, 'What's happening'. There will be these two schizophrenic characters," she added.
Bin Roye and Ho Mann Jahaan are scheduled to release this year, while Raees will hit the screens in 2016.
Watch: