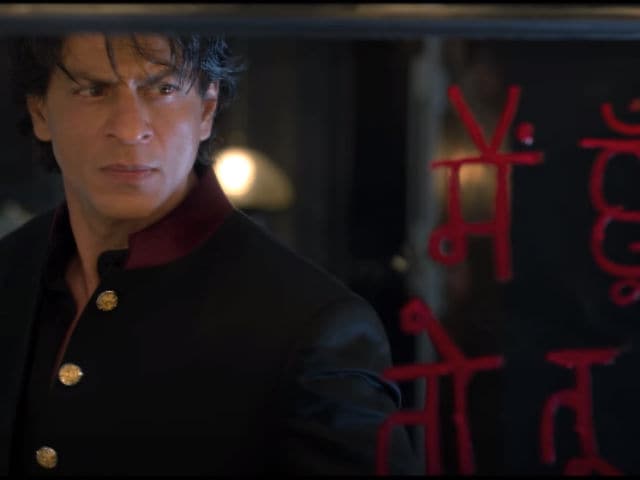 A still from Fan.

The first teaser of Shah Rukh Khan's film Fan seemed to be a touching story of a fan and his obsession for a superstar Aryan Khanna. But the new trailer of the film, which released on Monday, clearly suggests otherwise.
Fan which stars Shah Rukh as superstar Aryan Khanna as well as his obsessed fan Gaurav in the film, will pretty much remind you of the actor's 1993 film Darr. The first half of the trailer highlights Gaurav's obsession for Aryan Khanna until he finally manages to meet him. Gaurav supposedly does something nasty after which Aryan tells him clearly that he isn't a fan.
Gaurav's admiration for the superstar shatters when the latter refuses to spare five seconds of his time with his doting fan.(Also Read: Shah Rukh Khan Explains the Difficulties of Filming Fan)
And that statement was enough to turn the tables around. Amidst high octane action sequences, Gaurav takes on a mission to harm Aryan and thereafter states that now, a star will chase his fan. The trailer ends on a thrilling note, wherein Gaurav asserts that he validates Aryan's existence. "Gaurav hai toh Aryan hai. Gaurav nahi, toh Aryan kuch bhi nahi."
Directed by Maneesh Sharma, Fan also stars Waluscha De Sousa and Ileana D'Cruz.
Fan will release on April 15.
Watch how this khel turns khatarnaak: