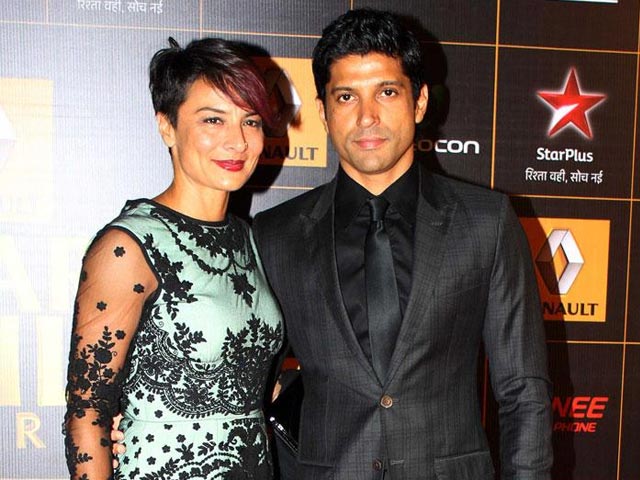 Actor-filmmaker Farhan Akhtar and his estranged wife Adhuna Bhabani, who announced they were separating last year in January, are now officially divorced, reports news agency IANS. The Bandra Family Court granted the couple a divorce on Monday. Farhan Akhtar, 43, and Adhuna Bhabani, 50, announced in January 2016 via a joint statement that they were ending their 16-year marriage. Adhuna Bhabani has been given custody of the former couple's two daughters while Farhan Akhtar has visitation rights, reports IANS. Farhan and Adhuna, a well-known hairdresser and owner of a chain of salons, married in 2000 after dating for a few years.
In January, Farhan and Adhuna issued this joint statement: "This is to announce that we, Adhuna and Farhan, have mutually and amicably decided to separate. Our children remain our priority and it is immensely important to us, as responsible parents, that they be protected from unwarranted speculation and public glare. We sincerely request that we are given the privacy that is required at this time to move forward in a dignified manner."
Farhan Akhtar, son of writers Javed Akhtar and Honey Irani and sister of filmmaker Zoya Akhtar, is a director, actor and producer. He is known for his work in the films Dil Chahta Hai, the Don reboot, Zindagi Na Milegi Dobara, Bhaag Milkha Bhaag, and the Rock On films. Adhuna Bhabani has collaborated on several films in her professional capacity.
Farhan, who is rumoured to be dating actress Shraddha Kapoor, produced this year's Shah Rukh Khan release Raees. He is currently working on Lucknow Central.
(With IANS inputs)