Farhan Akhtar Reveals The Experience of Recording Song With Big B 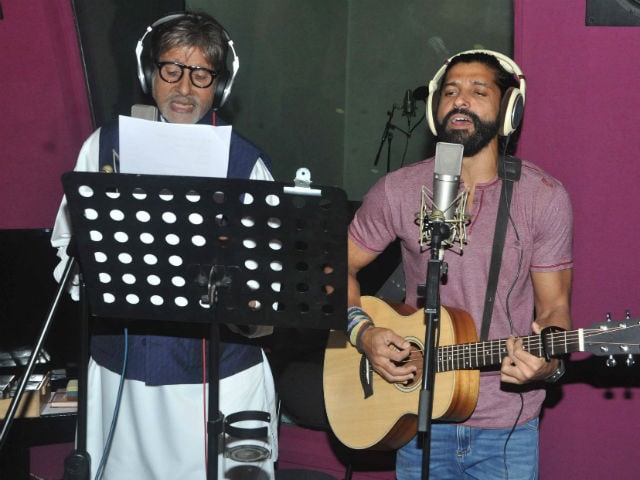 Big B and Farhan Akhtar photographed in Mumbai on December 13.

Farhan Akhtar has recorded a song Atrangi Yaari with Amitabh Bachchan for their upcoming film Wazir. Farhan said that it was a wonderful experience singing with Mr Bachchan. "It was a very beautiful experience," said Farhan

Farhan Akhtar said that he has never requested producers to let him sing for their movies.
Farhan has sung songs like Rock On, Pichle Saat Dino Mein and Senorita.
"No, I never do that. I seriously don't. In Bhaag Milkha Bhaag, I didn't sing any song. In Shaadi Ke Side Effects, I had just one song which was there in the background. Even in Luck By Chance, I didn't sing any song," said Farhan.
"It depends on the genre of the song. If I think I can emotionally contribute to it through my character, then I do request. Otherwise no," added Farhan.
Farhan has recorded a song Atrangi Yaari with Amitabh Bachchan for their upcoming film Wazir. Farhan said that it was a wonderful experience singing with Mr Bachchan.(Also Read: Amitabh Bachchan Leaves Kolkata Shoot After a Call From Wazir Producer)
"It was a very beautiful experience. We have heard his songs which he has sung in many movies. It's a wonderful song. So, it was fun performing it together," said Farhan.
Mr Bachchan, who has sung songs like Mere Angne Mein and Main Yahan Tu Wahan, does not consider himself as a singer.
"I am not a singer. Nor do I know how to sing. But a lot of things happen in a film where people say if the actor sings the song, then it'll be better. So, if it fits the scene, I sing," said Mr Bachchan.
Wazir is scheduled to release on January 8.