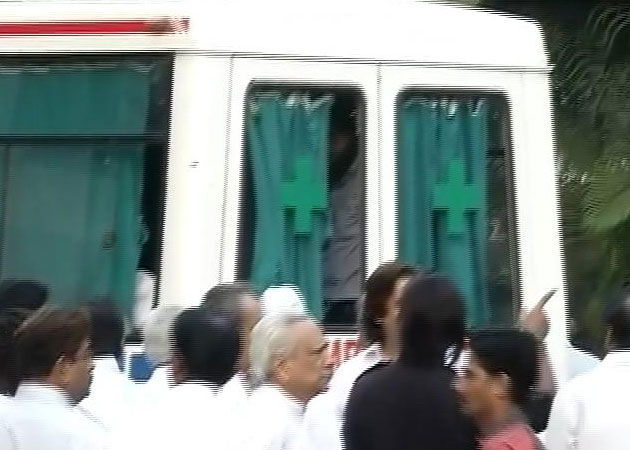 Farooq Sheikh's body was brought to Mumbai this evening from Dubai

Actor Farooq Sheikh's body was brought to Mumbai this evening from Dubai, where he died on Friday after a massive heart attack. He was 65.

Actor Farooq Sheikh's body was brought to Mumbai this evening from Dubai, where he died on Friday after a massive heart attack. He was 65.
The funeral will be held later today in Andheri.
The actor is survived by his wife Roopa and two daughters.
Born on March 25, 1948, Farooq Sheikh, a theatre actor, was 25 when he began his Bollywood career with a role in the 1973 classic Garm Hava.
He soon became a prominent part of parallel cinema in India, though he also continued to act and excel in mainstream cinema.
His roles in classics like Satyajit Ray's Shatranj Ke Khiladi, Umrao Jaan and Bazaar earned him critical fame. At the same time, his boy-next-door appeal and comic timing in films like Chashme Buddoor and Katha found universal appeal.
His co-star in Chashme Buddoor and many other films, Deepti Naval told NDTV, "He was the most natural actor I have worked with. In the nine films, we did together, I never caught him preparing for his role."
Farooq Sheikh worked with top directors in his 40-year-career in Bollywood. He also made an immense contribution to low-budget high quality movies, theatre and television. He hosted a popular talk show, Jeena Isi Ka Naam Hai for Zee TV, eleven years ago.
Shabana Azmi, one of the pillars of parallel cinema in India, said, "Its difficult for me to speak about Farooq in the past tense. It seems that it's a grammatical error. Farooq, inspite of being a quiet person, could fill in the room with his humor and wit."
His last Bollywood release was Club 60, earlier this month. He also played Ranbir Kapoor's father in Yeh Jawaani Hai Deewani, one of the top grossers of 2013.
With agency inputs