Fawad Khan on Being Famous, Success and Bollywood 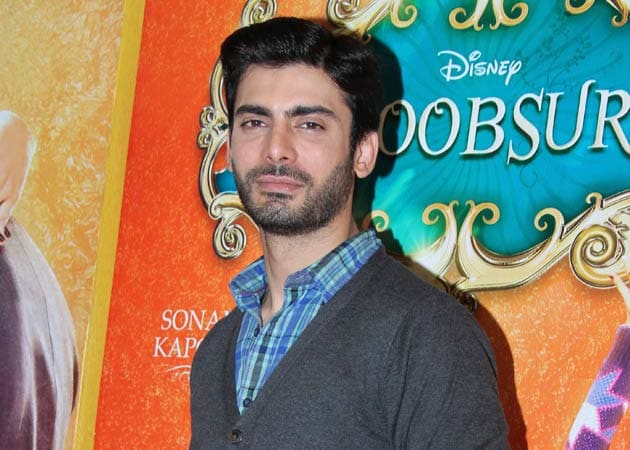 Fawad at a promotional event for Khoobsurat

He is a big name in Pakistan, thanks to his clean and rewarding roles in TV shows like Dastaan, Humsafar and Zindagi Gulzar Hai and films like Khuda Kay Liye

He may or may not take up bold and intimate roles, but Pakistani actor Fawad Khan, who enjoys a clean image, is clear about his responsibilities as a celebrity. The "unpredictable" actor-singer feels star status should be used "as rationally and as logically as possible".

He is a big name back home, thanks to his clean and rewarding roles in TV shows like Dastaan, Humsafar and Zindagi Gulzar Hai and films like Khuda Kay Liye. His popularity transcends the border and he struck a right chord with Indian audiences with the same shows.

Now the 32-year-old is set to take this further with his Bollywood debut Khoobsurat, again a clean family drama. (Also Read: Is Fawad's wife insecure?)

Asked why he chose a family entertainer for his debut, he said: "You do certain projects, play certain characters and present it to the audience because you tend to educate them."

"Celebrities, as public figures, have an opportunity to use their status as rationally and as logically as possible. It is a very dangerous position and when you take on that responsibility you have to take a lot of things into account."

Will he accept bold or intimate roles? In his response, he pointed out the difference between presenting something crassly and with class.

"There is a difference between vulgarity and aesthetics. When any such thing comes to me, and if I feel I am ready for it, you never know. I am unpredictable.

"The ball game is open, but I will play a little safe. it's not hypocrisy," he said reminding his character in Zindagi Gulzar Hai.

So far, a number of Pakistani artists like Ali Zafar, Veena Malik and Humaima Mallick, among others, have tried their luck in Bollywood but none could attain stardom.

Fawad is pretty open ended about success or failure.

"Everyone fears a financial crisis. And that matters to me as well. You have to keep your house running.

"I have had minimum expectation from my work even back home, but I have been fortunate in many ways. No one in my family is into music or films. For me, it has been an immense journey. You tend to learn a lot."

"I don't think about what's going to happen tomorrow, because if I start doing that I will tend to limit myself," he added.

Directed by Shashanka Ghosh, Khoobsurat, a remake of the 1980 super hit film, will see Fawad romancing Sonam Kapoor, who is central to the story.

When asked if he was sceptical about debuting in a female-centric story, he said: "It has its advantages and disadvantages, but choice matters at the end of the day. There were also male-centric films offered to me, but I wanted to try this.

"There are a lot of interactions between these two characters (Fawad and Sonam). Even if you have 15 minutes to be part of a project, you can do a lot with it. It depends on how you take what's given to you," said Fawad, who made an impact playing second fiddle to Shan in Khuda Kay Liye.