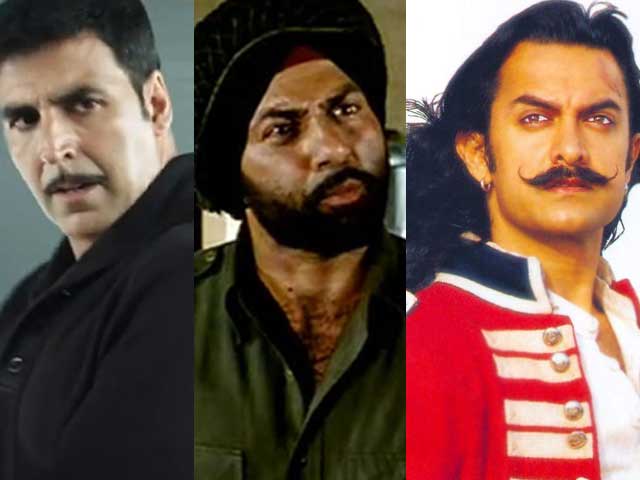 A still from Baby, Border and The Rising: Ballad of Mangal Pandey respectively

From Border, LOC Kargil to The Legend of Bhagat Singh and The Rising: Ballad of Mangal Pandey in the 1990s and early 2000s, the Hindi film industry saw a barrage of films delving on war and freedom frighters in an effort to promote patriotism. Such films were shown to the masses ahead of Republic Day and Independence Day.

But for contemporary filmmakers, patriotism is in highlighting social concerns like terrorism, sex trafficking, religious superstitions and political corruption. Industry experts believe this reflects the change that the viewers wish to see in their social surroundings.

Veteran filmmaker Mahesh Bhatt says the change in portrayal in patriotism is inevitable.

"Patriotism of that kind (in films like Border) was displayed when Pakistan was our arch rival and in terms of reference of those days, such films were made. Now things have changed because of a different kind of patriotism that you need to demonstrate," Bhatt told IANS.

"When you spotlight your own social evils, that is patriotism," he added.

Filmmaker JP Dutta's 1997 hit film Border was based on the India-Pakistan war of 1971; and his 2003 film LOC Kargil depicted the Kargil War fought between India and Pakistan.

The Legend of Bhagat Singh was a 2002 Indian historical biographical film about freedom fighter Bhagat Singh. And not to miss - the early 2000s was a period when films on Bhagat Singh were numerous, including Shaheed-E-Azam and 23rd March 1931: Shaheed.

Apart from these, films like Ab Tumhare Hawale Watan Saathiyo, Maachis, Pinjar and Lakshay were released during the 1990s and early 2000s. Most of these films dealt with wars and riots.

The hint of patriotism and struggle for independence remained in focus for a few years with films like Khelein Hum Jee Jaan Sey. The film starring Abhishek Bachchan was based on the Chittagong Uprising of 1930. However, it was not much appreciated at the box office.

Mahesh Bhatt is hopeful that today's filmmakers will revisit such films.

"I think patriotism is also a kind of narrative space, where filmmakers have made films and have found success. So, I think it will be used repeatedly to squeeze out optimum profit and I am not surprised that people will revisit that space," said Mr Bhatt.

Bollywood has tried different concepts, especially via scripts dealing with issues like terrorism and political corruption. Fanaa, New York, My Name Is Khan, A Wednesday!, Special 26 and Holiday: A Soldier Is Never Off Duty and the very recent release Baby are a case in point.

Actor Anupam Kher, who plays a pivotal role in Neeraj Pandey's Baby, says "it is not "necessary that every film deals with patriotism by bashing out another country. For him, it also means showing issues like terrorism and creating social awareness.

"Every film doesn't need to be about patriotism and we cannot make patriotic films bashing another country. Of course patriotism comes at that time, but there is this film (Baby) which talks about all topics like terrorism that is affecting entire country and the recent cases are attacks in Peshawar, Paris or Sydney," Anupam Kher told IANS.

Bollywood star Akshay Kumar, who plays an undercover agent in the film, says the taste of today's audiences has changed and that's why filmmakers are experimenting with scripts.

"We have to work as per viewers' taste. If we make films of our choice, then it would not make any sense," Akshay, who has been a part of many films based on terrorism, told IANS.

Not only terrorism but films like Mardaani that dealt with human trafficking and a tough female police officer, along with OMG - Oh My God! and the very recent PK showcasing and questioning the people's blind faith in godmen, grabbed eyeballs of moviegoers.

Also, freedom fighters as subjects have been replaced by sports personalities. Take for instance, Bhaag Milkha Bhaag and Mary Kom, about heroes who have brought pride to the country.

"It's not that patriotic films are not made nowadays. I had tears in my eyes when I saw Mary Kom. It was very patriotic when the flag was hoisted and the National Anthem was played," Shilpa told IANS.