Filmfare Awards 2016: In Pics and Videos, an Inside Look at the Best Moments 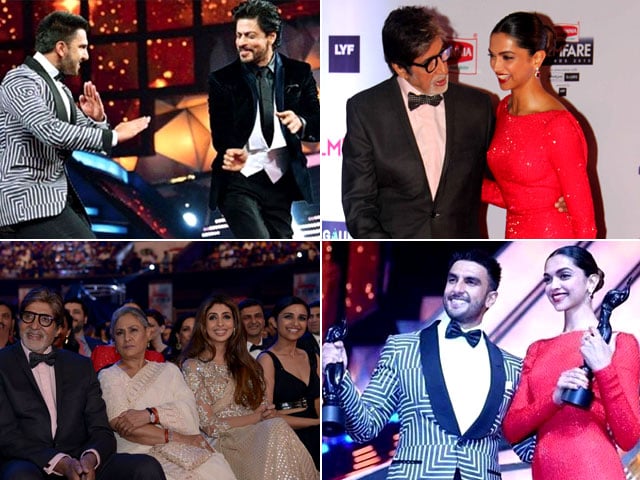 SRK and Alia's Shaandaar spoof of singers Miley Cyrus and Robin Thicke's controversial twerking performance at the 2013 MTV Video and Music Awards, was one of the high points of the show. Ranveer and Deepika delivered quite a few celluloid-worthy moments of their own

The star-studded Filmfare Awards ceremony held in Mumbai on January 15 was off limits for most of the press but, luckily for us, there was social media and fan clubs. Here's an insider's look into one of Bollywood's most coveted award shows. You can thank us later. (See Pics: Big B, Deepika, Salman on A-List Red Carpet)

Shah Rukh Khan and Alia Bhatt's spoof of singers Miley Cyrus and Robin Thicke's controversial twerking performance at the 2013 MTV VMAs, was one of the high points of the show.

Big B, who won the Critics' Award for Best Actor (Piku), led the A-list cheer squad along with his wife Jaya Bachchan and their daughter Shweta Nanda.


FB 1214 - very late ... but just to let you know that got Best Actor Filmfare critics award for PIKU just now .. so privileged and happy for all that made PIKU what it is today .. There will be more later ...

Rumoured couple and Ranveer Singh and Deepika Padukone delivered quite a few celluloid-worthy moments soon after being declared Best Actors for Bajirao Mastani and Piku.
Like this Kodak pose on the stage:

An emotional Ranveer touched his father Jagjit Singh's feet soon after being announced the winner:


The best actor of the year Ranveer Singh for #BhajiraoMastani

Rekha, who presented Ranveer with the award, cheered for him with the popular Har Har Mahadev dialogue from Bajirao Mastani.


. @RanveerOfficial accepting his #Filmfare Award for Best Actor in a Leading Role for #BajiraoMastanipic.twitter.com/FKE0yTwRrT

Salman Khan, usually a no-show at award shows, set the stage on fire as he danced to the tunes of the title song from his blockbuster Prem Ratan Dhan Payo:

Actor Sonu Sood had a 'shirtless moment', thanks to SRK with who he worked in Happy New Year.


More pics : @iamsrk and SanjayMishra make @SonuSood take off his shirt for a gag at #BritanniaFilmfareAwardspic.twitter.com/aIXUYez05l

There was this bromance between Gunday co-stars and good friends Ranveer and Arjun Kapoor:

But it was SRK's Tukur Tukur, from his film Dilwale that stole the show: