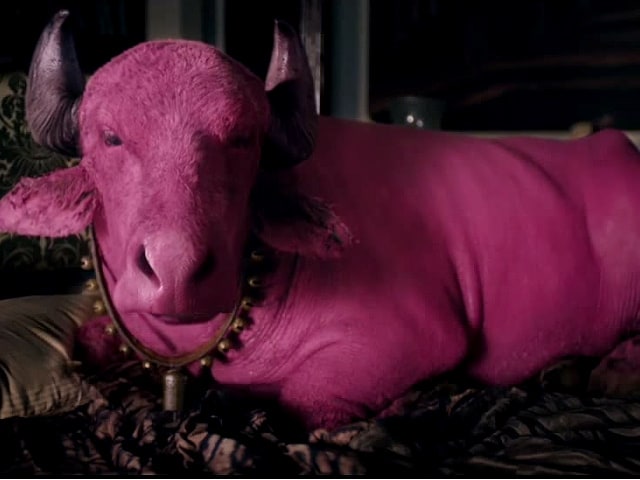 Alia Bhatt and Shahid Kapoor's Gulaabo is enjoying a Shaandaar run on YouTube and has crossed over 2.6 million views in less than 24 hours. The song transported us to Bollywood's pink past, and so for you we retrace the thin pink line. Rose-tinted glasses optional

Yo, Bollywood. Why so pink?
Alia Bhatt and Shahid Kapoor's upcoming film is off to a Shaandaar start. The makers released the first song of the film, titled Gulaabo. Despite the name, it's not very pink. Nonetheless, it sets the party mood. (Also Read: Alia Bhatt's Shaandaar Gender Bender in New Song Gulaabo)
But that's not what this story is about.
Gulaabo transported us to Bollywood's pink past, and so for you we retrace the thin pink line. Rose-tinted glasses optional.
First up is the literal use of the word Gulaabo. Vishal Bhardwaj's 2013 film Matru Ki Bijlee Ka Mandola made the word famous, as it was the name of the desi alcohol that Pankaj Kapur so loved. The effects of Gulaabo on Mr Kapur's character were rather hilarious and hence became as famous (if not more) than the film. Shaandaar also stars Mr Kapur as Alia's father.

Gulaabi, a derivative of Gulaabo, also has a special Bollywood connect. It has been used by actors to describe their beloved's features, like here by Rajesh Khanna in Gulaabi Aankhen song from The Train:

Sushant Singh Rajput and Vaani Kapoor used Gulaabi to describe their Shuddh Desi Romance. PS: It was also because the song was based in Jaipur, popularly known as the Pink City.

In the song Phool Gulaab Ka from Biwi Ho To Aisi, everything's rosy between Rekha and late actor Farooq Shaikh.

Gulaab and its derivatives have most commonly implied romance, rosy or otherwise, but its connotation changed dramatically in the film Gulaab Gang, based on the exploits of real life pink sari-clad vigilantes Bundelkhand called Gulaabi Gang.

Meanwhile, Alia and Shahid's Gulaabo is enjoying a Shaandaar run on YouTube and has crossed over 2.6 million views in less than 24 hours.
Watch the song here: