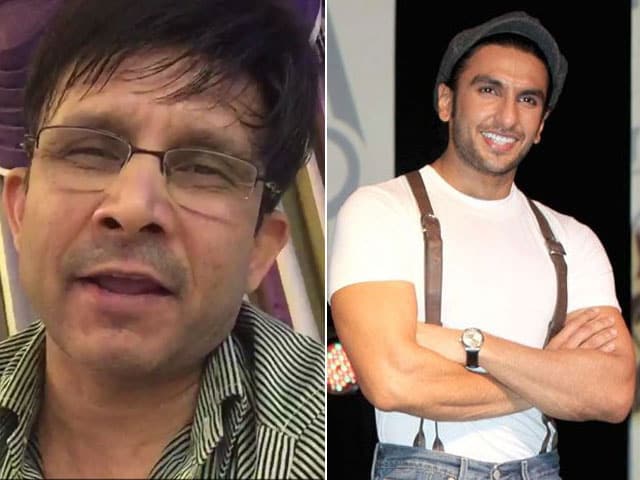 KRK expressed his love for the Dil Dhadakne Do actor on Twitter.

Kamaal R Khan, Twitter's resident agent provocateur, has tweeted a peace offering to actor Ranveer Singh. It may just be the Deshdrohi actor's best performance yet.

This is for you Mr. @RanveerOfficial Don't dare to hate me. pic.twitter.com/8knwJCbxd6

Ranveer, 30, allegedly blocked KRK on Twitter after the actor-producer reviewed the Dil Dhadakne Do star's appearance on the controversial AIB Roast in obscenities and the filthiest of terms. That, however, was at the beginning of the year so it's unclear why KRK has waited this long to offer up a declaration of love. Clearly, being blocked by Ranveer still hurts.
Being blocked also means that Ranveer probably won't see KRK's tweet.
KRK has fallen into the habit of targeting celebrities in his tweets and has proved himself an equal opportunity offender. He's been described by actress Sonakshi Sinha as a 'waste of space' and hashtagged a #lowlife by Queen's Lisa Haydon.
Meanwhile, Ranveer, who was last seen in Zoya Akhtar's Dil Dhadakne Do opposite Anushka Sharma, is gearing up for the release of his upcoming movie Bajirao Mastani, which also stars Deepika Padukone and Priyanka Chopra. Directed by Sanjay Leela Bhansali, the movie is slated for a December 18 release.