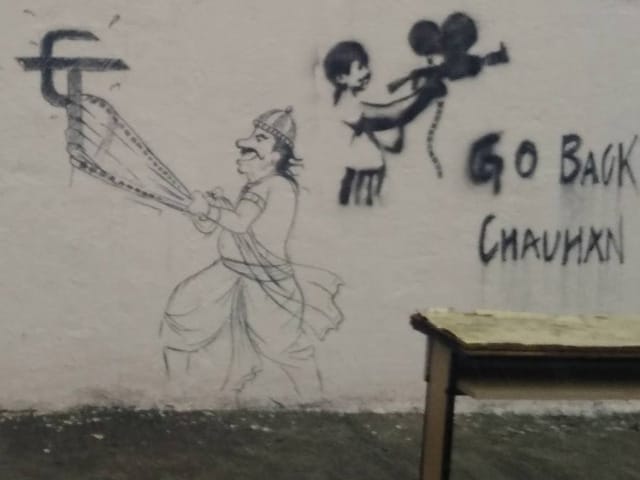 The students are also demanding that the FTII society be dissolved and search committees be set up with a transparent process in place to look into the appointments of the chairperson. In the past Shyam Benegal, Mrinal Sen, Mahesh Bhatt and Girish Karnad have served as chairperson of the institute

Television actor Gajendra Chauhan, viewed as close to the BJP, will remain as chairperson of Film and Television Institute of India (FTII), and to placate protesting students, the government is planning to install a co-chairperson of the institute, sources said.
The Information and Broadcasting Ministry hopes to persuade the students to call off their three-month-old strike, the government is known to be firm on not caving in to the demand to remove Mr Chauhan from the top post. (Also Read: FTII Students End Hunger Strike, Talks With Government on Tuesday)
Instead, as a half-way measure, the ministry is planning to propose a co-chairperson of the institute who would be "acceptable" to the students, informed sources told IANS.
In another measure, the government is also planning to remove around five members from the governing council against whom the students had strong objections.
"Gajendra Chauhan will remain. We are considering these measures for the students," the source told IANS, declining to be named.
In fact, a three-member committee - the I&B Ministry constituted for examining the students' grievances - headed by SM Khan, Registrar of Newspapers of India, also had earlier made a similar proposal. (Also Read - Sudhir Mishra on FTII Row: Appoint Sanjay Leela Bhansali, Raju Hirani)
The FTII students presented to the ministry a list of signatories of national and international repute, including well-known American philosopher and political commentator Noam Chomsky, who have expressed support for their cause.
The agitating students called off their 18-day-old hunger strike on September 27 after the ministry agreed talk to them on Tuesday to resolve the issue.
The students are up in arms against Mr Chauhan, who is best known only for his role as Yudhisthir in BR Chopra's TV series Mahabharat, aired on Doordarshan between 1988-90.
He has done small roles in nondescript TV soaps and forgettable films. He has been associated with the BJP for several years and had actively campaigned for the party during the 2014 elections.
In July, well-known filmmaker Jahnu Barua, cinematographer Santosh Sivan and actor Pallavi Joshi quit the 12-member governing council of the FTII, expressing unhappiness over the government's handling of the crisis.
The students are also demanding that the FTII society be dissolved and search committees be set up with a transparent process in place to look into the appointments of the chairperson and members. They are also demanding that FTII be given the status of a premium national institute like the IIT and the IIM and that no bureaucrat should be appointed as FTII director.
Among the personalities who signed the students' letter in support are: Noam Chomsky, Columbia University professor, prominent academic Partha Chatterjee, and Indian historian and journalist Vijay Prashad; film personalities Vidya Balan, Sanjay Leela Bhansali and Dibakar Bannerjee. (Also Read: Vidya Balan Supports FTII Students, Signs Letter to President)
The students have also reached out to employees at Apple, Intel, Facebook and other international companies to garner support for their cause.
Eminent personalities who have earlier served as chairperson of the institute earlier are Shyam Benegal, Mrinal Sen, Adoor Gopalakrishnan, Mahesh Bhatt and Girish Karnad.