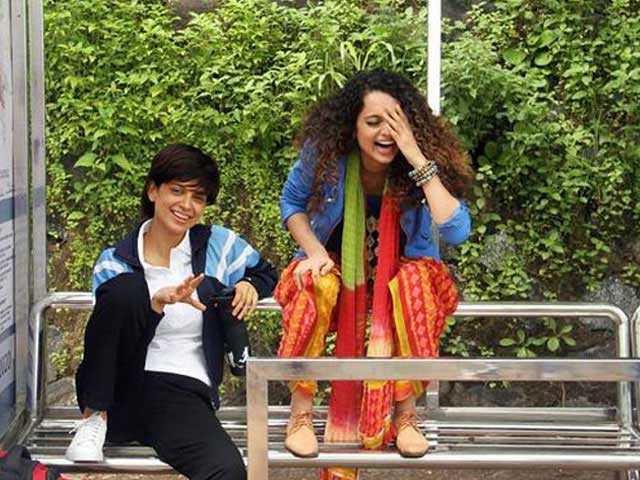 A still from the film Tanu Weds Manu Returns

Box Office India suggests the closing worldwide total could be as high as Rs 225 crores, higher than the takings of films like Jab Tak Hai Jaan and Singham Returns

Actress Kangana Ranaut is the undisputed Queen of the box office with double trouble film Tanu Weds Manu Returns collecting a little over Rs 100 crores in two weeks at home.

Director Aanand L Rai told news agency IANS, "Nothing can be bigger and more encouraging than this for a filmmaker. I'd like to thank everyone for accepting the film with so much warmth."
Kangana is as thrilled by the box office as it is by her. "I am pleased, very pleased and it wouldn't be wrong for me to brag about these 100 crores, I can be shallow about these things," she told NDTV last weekend.
Blockbuster Tanu is looking at more than twice that sum once business at the Indian box office and abroad are added up. Box Office India suggests the closing worldwide total could be as high as Rs 225 crores, higher than the takings of films like Jab Tak Hai Jaan and Singham Returns.
For the Aanand L Rai-directed Tanu Weds Manu Returns, the returns far outstrip its relatively small investment of under Rs 50 crores. Alia Bhatt's 2014 film 2 States is the best under-50 performer so far, with a worldwide collection of Rs 173 crores. Assuming Tanu Weds Manu Returns loses no momentum, it ought to put a distance of about 50 crores between itself and 2 States, even with the impending arrival of the Zoya Akhtar-directed Dil Dhadakne Do this Friday.
Tanu Weds Manu Returns, co-starring R Madhavan, Jimmy Sheirgill, Deepak Dobriyal and Swara Bhaskar, is also this year's first 100 crore Bollywood film at home. Deepika Padukone's Piku and Akshay Kumar's Gabbar Is Back follow in its wake with 100 crores each collected worldwide.
Meanwhile, Aamir Khan's PK is also breaking records after releasing in China two weeks ago and will likely make Rs 100 crores at the Chinese box office alone: