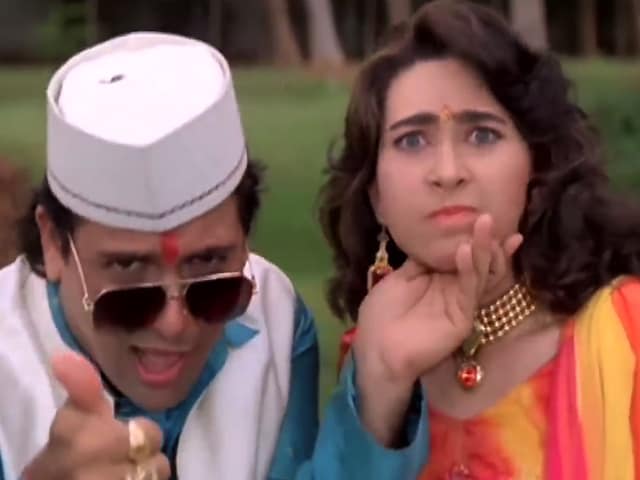 Govinda and Karisma Kapoor in a still from Raja Babu.

"Karisma is one of those actors who can take any song to the next level," said Govinda

Dancing with actress Karisma Kapoor after a long time made actor Govinda nostalgic on the sets of TV reality show Dance India Dance - Super Moms.
The duo, who set the silver screen ablaze in the past with hit dance numbers like What is mobile number and Main toh raste se ja raha tha, will be seen together in the finale of the TV show.
Describing the experience, Govinda said in a statement: "It was a nostalgic moment when we danced again together after a long time. The roaring applause we received on the sets reminded me of the kind of love and adulation we enjoyed when these songs had released." (Also Read: Govinda Won't Promote Jagga Jasoos, Says 'Nobody Allowed to Defame me')
The actors were last seen together in Shikari, which released in 2000. They've worked together in 11 movies together and have delivered hits like Raja Babu, Coolie No 1 and Hero No 1, among others.
Govinda said he has "immense regard" for Karisma, who is lovingly called Lolo.
"It is a pleasure to share the stage with Karisma as she is one of those actors who can take any song to the next level with her electrifying performance and sheer passion for dance," he added.
Happy with his role as a judge on the reality show, the 51-year-old said, "I got an opportunity to witness some of our country's most amazing talents week after week and our performance makes this show all the more special for me."
Govinda shared the judges' panel on the Zee TV show with choreographers Terence Lewis and Geeta Kapur.