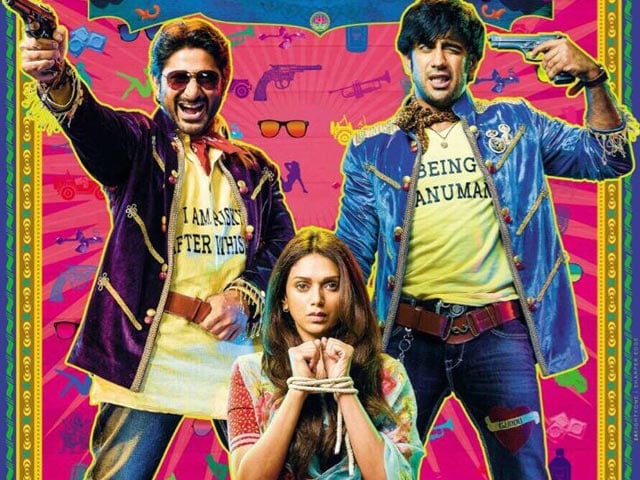 This image was posted on Twitter by Aditi Rao Hydari

Guddu Rangeela's poster is as quirky and colourful as its title

The first poster of Subhash Kapoor's Guddu Rangeela, featuring actors Arshad Warsi, Amit Sadh and Aditi Rao Hydari, is as quirky and colourful as the film's title. Its trailer has been attached to Bombay Velvet, which is releasing on May 15.
Mr Kapoor, who won over audiences and critics alike with his National Award winning movie Jolly LLB, believes in films with a message that is delivered to audiences in an entertaining fashion. With Guddu Rangeela, he's attempting to do the same.
In his new film, he touches upon the sensitive social issue of Khap Panchayat with an out-and-out masala action comedy, which also stars Ronit Roy.
The trailer of Guddu Rangeela will be out on May 14.

The #GudduRangeela trailer will be out at 2 pm tom.Till then here is the poster! @foxstarhindipic.twitter.com/6F6GuKFzAH

Produced by Sangeeta Ahir and presented by Fox Star Studios, Guddu Rangeela will hit the theatres in July 2015.