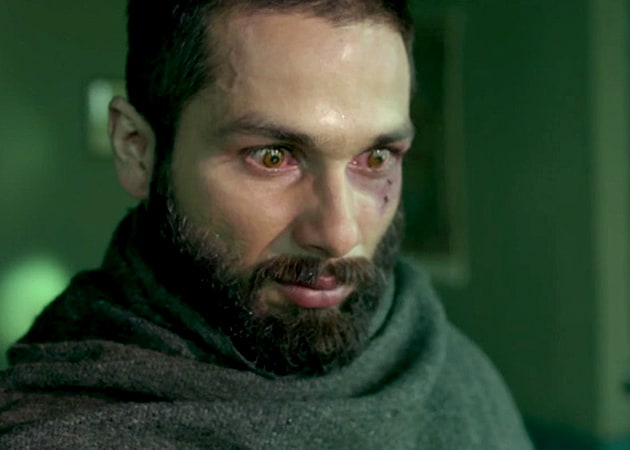 Shahid Kapoor in a still from Haider.

Haider had earlier drowned in the success of Bang Bang, which released the same day

Actor Shahid Kapoor's latest revenge drama film Haider, which is an adaptation of Shakespeare's tragedy Hamlet, with Kashmir as its backdrop, has achieved many milestones. It has become the first Kashmir-based film in many years to click with the audience, acclaimed director Vishal Bhardwaj's first golden goose, and has reportedly been declared the fifth highest-rated crime drama of all times.

The film is based on the story of on a young man whose life is destroyed by fate. The film made on a budget of Rs 22-crore has crossed the Rs 50-crore mark and is still counting.

But the success of Haider, where sufferings in the Kashmir Valley seethe through each frame, makes one wonder why a non-formulaic drama sans any fluff is flying so high at the box office? Trade analysts say that the content and word-of-mouth reviews have done wonders for Haider, which earlier drowned in the success of Hrithik Roshan's Bang Bang, which released the same day. Also, the way Mr Bhardwaj has merged the Shakespearean tragedy with the conflict in Kashmir resonated with the audience.

"People didn't expect it to do well because it's for a specific audience. But the word-of-mouth is really strong."

"Now, most people are going for Haider first and Bang Bang later. I've spoken to a few people after watching the movie, and they said that the performance was really good - something that they were not expecting from Shahid Kapoor and Shraddha Kapoor. And people generally like Vishal Bhardwaj's films. He makes good movies," Mr Sahay told IANS. Mr Bhardwaj's passion for the craft reflects in each of his narratives, but Haider, his third film based on Shakespearean dramas after Omkara (Othello) and Maqbool (Macbeth), is different as it broke the myth that such films can win appreciation, but not big bucks.

Set in insurgency-hit Kashmir in the mid-1990s, the film has raised the bar for others who are attempting a serious drama in the same league.

Rajesh Thadani of Multimedia Combines sums up its success, saying, "It's a sensible film and the subject has been handled well. Right choices of actors and good music have worked in its favour. The content is really strong, plus it is Vishal Bhardwaj's film." The intensity and information in the revenge drama is close to reality, thanks to journalist Basharat Peer, who teamed up with Mr Bhardwaj to pen the script of Haider. Basharat himself hails from Kashmir. Mr Bhardwaj's storytelling got ample support from his powerful cast - Shahid, Tabu, Kay Kay Menon and Irrfan Khan.

Amrita Pandey, vice president and head (Marketing and Distribution), Studios, Disney India, said that ever since the film's first promos came out, it connected with the audience by arousing their curiosity. "And when the film came out, people connected with the family drama. Ever since it was screened, it phenomenally and unanimously received a positive response," Amrita told IANS.

She too admits that phenomenal word of mouth played an important role in taking it to a wider audience.

"It was widely discussed on Twitter. The discussion on Twitter was the measurement of sentiments about the film," she added.

Distributor Rakesh Sippy feels that apart from the strong script and performances, "The fact that it was shot in Kashmir has made a difference". "The word-of-mouth was so strong. You feel like you shouldn't miss it," he added. The five-day long Dussehra weekend was like a blessing in disguise the film, allowing it enough breathing space to find their audience and connect with them.

"There is always an audience for every film. Be it comedy or dark genre, people need to connect with the film and the audience was able to do so with Haider. The acting and script are of superior quality," PVR Pictures' chief operating officer Deepak Sharma told IANS.

In fact, Shahid, who has been waiting for a big hit for some time, too takes pride in being part great cinema. "So Haider became the 5th highest rated crime drama of all time. And the highest rated Hindi movie on IMDb," he tweeted. Even before the film had released, Mr Bhardwaj's wife and renowned singer Rekha had said that "Haider is the best film of Vishal's career."

It seems now everyone is on the same page with Rekha, who has sung the song Aaj ke naam in the film.