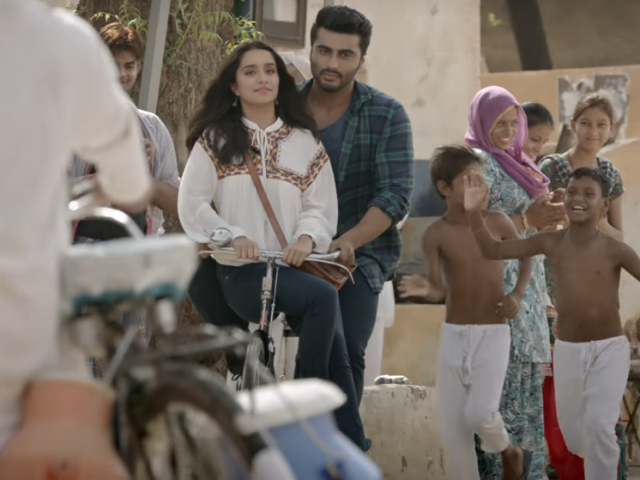 Shraddha Kapoor and Arjun Kapoor in Half Girlfriend.

The second song of Arjun Kapoor and Shraddha Kapoor's Half Girlfriend, Phir Bhi Tumko Chahunga, was released on Tuesday. Sung by Arijit Singh and Shashaa Tirupati, the song is a soulful journey of Madhav Jha and Riya Somani, played by Arjun and Shraddha respectively. The song has been written by Manoj Muntashir. Shot across Benaras, Delhi and USA, Phir Bhi Tumko Chahunga portrays the transition of relationship that Riya and Madhav go through - from being friends to Madhav Jha's search for his unrequited love that takes him to the US. The song begins with a disturbed Madhav aka Arjun running on a bridge on a snowy night. He recollects the times he spent with Riya as he runs aimlessly.
Here's a look at the song:
Accompanied by Arijit's soulful rendition, Madhav is taken back to the days when Riya and he visited Benaras. From games of basketball to travelling around on bicycles, there's something amiss in Madhav's life now. His search for his 'half girlfriend' takes him overseas. Meanwhile, Riya is a popular songstress and Madhav doesn't miss any of her gigs. The song ends with an alcoholic Madhav meeting with an accident.
In a fun video on Monday, Arjun Kapoor and Shraddha Kapoor shared the news of the release of their song.

Half Girlfriend, directed by Mohit Suri, is an adaptation of Chetan Bhagat's novel by the same name. The film revolves around a Bihari student who comes to Delhi to study and falls in love with Riya Somani, who is from an affluent Delhi family. Their love for basketball brings them together. But Riya ends up being Madhav's 'Half Girlfriend'. The film is set to release on May 19.